If there’s one thing LA has to brag about in the arts, it’s range: local groups, global tours, and venues large and small around the city consistently offer a variety of events, suiting tastes from silly to serious. The dance calendar for early November seems especially packed. If you’re looking for a performance, look to any of these all around the county. And don’t forget Lineage Dance, which I featured recently on Culture Spot.

“To Be Straight With You” by DV8 Physical Theatre 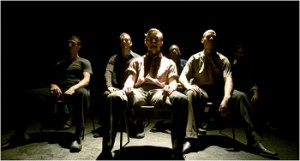 Friday and Saturday, Nov. 6 and 7, at 8 p.m.: English performance troupe DV8 will present the West Coast premiere of its newest work at UCLA Live. The cross-disciplinary piece promises characteristically to push the envelope, exploring tolerance and intolerance in personal matters so often made political. Lloyd Newson has acted as artistic director since the company formed in 1986 and has never slowed his agenda of highly acclaimed dances and films made with apparent technique and explicit intensity.

Wednesday through Saturday, Nov. 11-14, at 8:30 p.m.: REDCAT is bringing a seminal work of postmodern dance back to the stage. The original 1965 production elicited criticism and outrage, but also inspired a new wave of dancemakers.  Led by Anne Collod and with musical accompaniment from Morton Subotnick, the 2009 recreation features recognized choreographers from around the world and recontextualizes itself for the 21st century.

Barynya at the Music Center

The World City series brings artists from far and wide to perform at the amphitheater atop Disney Concert Hall. This month, Barynya presents its world-renowned Russian, Cossack, and Ukrainian music, costumes, and dance for a concert free of charge. There are family events at the nearby Blue Ribbon Garden before and after the performance.

“No Dancing at the Mandrake: Round 3” from Dance Camera West

Sunday, Nov. 15, at 7 p.m.: Dance Camera West has established itself as a regular on the Los Angeles dance scene and as a nationally recognized festival. With an open mic-like forum for films, “No Dancing at the Mandrake” is a series for viewing or presenting new work and works in progress – at, of course, the Mandrake Bar on La Cienega.  This is the third installment. Entries are 10 minutes long or shorter and arrive with the audience – no curating, no predictability, and no doubt a great look at how dance on film is progressing in LA.