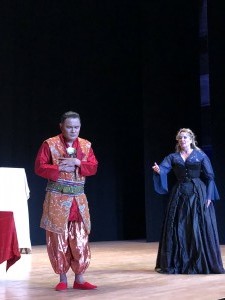 Bravo (on a number of counts) to Numi Opera for their inaugural production of Alexander Zemlinsky’s “Der Zwerg” on May 30 and June 2.

Second, as Gordon noted in the program, Numi Opera has a special mission: “to rediscover operas that have fallen into obscurity due to social and political injustice.” Numi’s first season focuses on Jewish composers suppressed by the Nazis, Zemlinsky and Erich Korngold, whose “Der Ring Des Polykrates” will be performed in December. “Der Zwerg” is a one-act opera that has been rarely performed since its debut in Cologne, Germany, in 1922.

Numi’s mission was inspired by Gordon’s own family’s experience in World War II. And she fell in love (as did I) with “Der Zwerg” when she saw LA Opera’s production in James Conlon’s Recovered Voices series. That was a gorgeous, lavish production that a small company could never match.

So Numi naturally put the spotlight on the singers, who were exceptional and had beautiful costumes by Tanisa Fatchett of Make Believe, Inc. Unfortunately, Numi chose to forego the orchestra, but had the talented Music Director Christopher Luthi at the piano. They added a narrator who read parts of Oscar Wilde’s story, “The Birthday of the Infanta,” upon which the opera was based. The narration and the ballet dancer who entertained the Infanta at her 18th birthday party added to the fairy tale feel of the story. The lack of set design was conspicuous; the enormous solid black backdrop was like a gaping black hole behind the singers.

Der Zwerg is a dwarf given by the Sultan to the Infanta. He doesn’t know that he is ugly and deformed, and everyone laughs at him. Der Zwerg falls in love with the Infanta. The Infanta wants Ghita to show him his reflection in a mirror, but Ghita can’t bring herself to do it. When he accidentally sees his reflection, he is devastated. He asks the Infanta to tell him it isn’t true that he is hideous. She will not, and leaves him to die of a broken heart.

It’s a heartbreaking story (all the more so when you know that Zemlinsky saw himself as the dwarf in his own failed relationship with Alma Mahler), and Numi Opera did a wonderful job of bringing out its beauty and poignancy.