Onassis at the Stella Adler Theatre 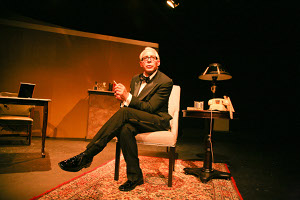 Savvy Angelenos know that there better be a damn good reason to pilot themselves to Hollywood and Highland, that nexus of traffic, tourists and tackiness. Well, here’s one: go to the Stella Adler Theatre to witness Anthony Skordi as Aristotle Onassis. The world premiere “Onassis,” directed by Bruce Katzman, is as remarkable a one-man show as you are likely to see this year.

Variously known as the richest man in the world and the world’s greatest playboy, Greek shipping magnate Onassis was a cultural icon of his day, instantly recognizable. When Skordi first comes shambling out from backstage dressed in a tuxedo, you take in the coiffed silver hair, the signature glasses, an unlit cigarette in hand, and you think, “This guy looks a lot like Onassis.”

Then, as a Greek hymn plays in the background, he begins to speak in a deep and gravelly baritone — heavily accented. And without exactly knowing the actual voice of the man, you have absolute confidence that Skordi has got his character down pat, the same way you know that Streep has perfected Julia Child or Margaret Thatcher. This is the mark of a highly professional actor who has mastered his craft.

For the next 80 minutes, Skordi, who also co-wrote (with Willard Simms) this play, takes us along a linear narrative of Onassis’ life — from boyhood to old age — that touches on many of its defining moments. It’s not exactly a monologue since Skordi briefly — and entertainingly — inhabits the voices and mannerisms of other characters during dramatic dialogues with key figures from his past. Changes in lighting and music help signal the shift from one story segment to another. The set comprises several distinct zones: a living room/office, an altar, a ship’s rail, and a couple of tables, the blue and white colors of Greece predominating.

As Skordi/Onassis swills scotch and reminisces, we get a fascinating look inside the mind of Onassis, to see what makes him tick. He is alternately wistful, boastful, and scornful, but we also see glimpses of his humor and macho swagger. When he describes his affair with the great opera singer Maria Callas, her voice floats through the speakers performing a famous aria. Perhaps most interestingly, we experience the flowering of a born entrepreneur, coming to understand what it was that made him different in his thoughts and actions from the average man. Mixed in with the text are bits of original quotes from Onassis, including my favorite: “Women see me taller than I am; that’s because they see me standing on my money.”

As the play nears its conclusion, Onassis in his older years (he died in 1975) becomes philosophical about his life. We understand him as quite a lonely man. Those who should be closest to him are not really. Jackie Kennedy is “an ice queen” who does not much like Greece and prefers New York. His two adored children, educated abroad, he rarely sees, and the subsequent death of his son in a plane crash has clearly hollowed him out.

He invokes Greek myth, comparing himself to Icarus who flew too close to the sun, and to Odysseus the wanderer who struggled to find his way back to Ithaca. In a poignant finale we realize that in Onassis’ case, returning “home” was an impossibility: his boyhood home, Smyrna, was cleared of Greeks in a population exchange in 1923 and was renamed Izmir, Turkey. RIP Ari Onassis; yasou, Anthony Skordi.