One November Yankee at the NoHo Arts Center 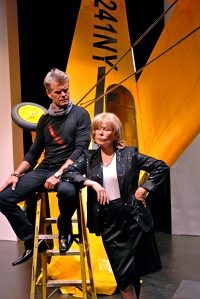 Harry Hamlin and Loretta Swit star in the world premiere of "One November Yankee," written and directed by Josh Ravetch and now playing at the NoHo Arts Center in North Hollywood. / Photo by Robert Arbogast

The world premiere of “One November Yankee,” deftly written and smoothly directed by Joshua Ravetch, should merit a very nice run at the NoHo Arts Center with the marquee draw of its two actors, TV favorites Harry Hamlin and Loretta Swit. Besides getting the chance to see these two talented actors up-close and personal, the audience will receive the added treat of Hamlin’s booming stage presence, Swit’s incredible command of not one, but two very wordy monologues delivered with machine gun precision and rapidity, and a script that’s cleverly cohesive and smart.

The play consists of four scenes with Hamlin and Swit portraying three different sets of brother and sister. “One November Yankee” refers to the name of the crashed plane (stunningly recreated by set designer Dana Moran Williams and placed center stage) that’s central to the three sets of siblings. Hamlin is most effective as the injured plane crash victim in the second scene. With their acting expertise aided by Kate Bergh’s spot-on costuming, both actors succeed in completely morphing into the distinctly different characters.

One little detail amiss: the video of the yellow plane featured has different ID letters and numbers on it than the set piece’s “N241NY.”