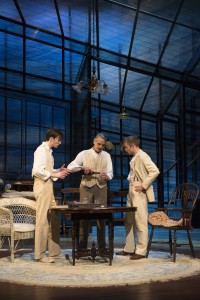 Eugene O’Neill’s Pulitzer prize-winning masterpiece captures one fateful summer’s day in the life of the Tyrones. Haunted by the past but unable to face the truth of the present, James and Mary Tyrone and their two sons test the bonds of a family caught in a cycle of love and resentment. As day turns to night and each member of the family indulges in their vices, the truth unravels, leaving behind a quartet of ruined lives.

All of the actors, including megastars Iron and Manville, have been with the production since its West End opening in late January and through the New York run. Two of them — Rory Keenan (James Tyrone Jr.) and Matthew Beard (Edmund Tyrone) — gave us a glimpse of what we can expect at the Wallis.

Keenan, best known for the role of Bilibin in the latest BBC adaptation of “War & Peace” and his work in “Stan Lee’s Lucky Man” and “Peaky Blinders,” called “Long Day’s Journey Into Night” “a rare happy marriage of direction, design and performance.”

“I most enjoy bringing both light and dark to the final part of Act 4,” Keenan said of his role as James Tyrone Jr. “It’s a twisted display of love, but also inherently brutal.”

Beard, best known for his work in “The Riot Club,” “The Imitation Game” and “The Look of Love,” made his stage debut as Edward in “Skylight” (Wyndham’s Theatre) starring Carey Mulligan and Bill Nighy, for which he was nominated for a Tony Award when the production transferred to Broadway. He said this production is not to be missed: “It’s a chance to see an American classic directed by one of our finest directors and starring two of our greatest actors.”

In addition to sharing the stage with actors he admires so much, Beard is also enjoying the nuances of his role as Edmund Tyrone. “I’m still, even now towards the end of our run, finding new things in the text,” he said.

Of course, every role has its challenges: “I drink a lot of ‘whiskey’ on stage,” he said, “so getting to the end without running to the restroom.”

For tickets and information: http://www.thewallis.org/longdays