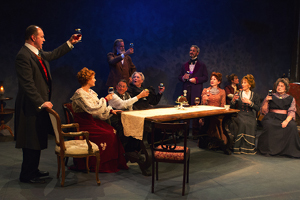 Frenetic Angelenos, be ready to be lulled by the languid pacing of a turn-of-the-century Irish dinner party in Open Fist Theatre Company’s production of James Joyce’s “The Dead,” with book by Richard Nelson and music by Shaun Davey, currently onstage at the Greenway Court Theatre.

A talented cast, accompanied by a very abled quartet of musicians (led by Musical Director Dean Mora), takes you back in time to an annual Christmas gathering hosted by two aunts and their niece, lovingly nicknamed “The Three Graces,” where everyone takes their turn singing for their supper.

Rob Nagle masterfully dominates the stage and the ensemble, as he should, as Gabriel Conroy, the narrator and responsible elder statesman of the group. Nagle succeeds the best in revealing the deepest of his inner thoughts and fears. Others with glimpses of deeper characterization include Martha Demson as Gabriel’s wife Gretta, guilty of having loved another, and Jacque Lynn Colton as the elder Aunt Julia, once gifted with a beautiful voice and now hosting what will be her last Christmas get-together. The delightful Judith Scarpone has the most fun as the still-vivacious spinster Aunt Kate with her clever asides, fancy footwork and coy flirtations.

Other adept members of the cast not given as much chance for complete character developments beyond their brief moments to shine include Melissa Sullivan, Bruce Dickinson, John LeMay, Nicola Hersh, Kendra Chell, Richard Michael Knolla, Kiley Eberhardt, Devon Armstrong and Charlotte Chanler.

Sharp Irish folk dance choreography by Christine Sang is handled well by the ensemble, with Armstrong the nimblest dancer. Of the 15 songs, including some toe-tapping and some quite haunting, stand-outs include “Naughty Girls,” sung and vamped by Colton, Scarpone and Sullivan, and “Goldenhair,” a longing lament sung by Demson which smoothly transforms into a love duet with Nagle.

Finally, kudos to all for keeping their Irish brogues consistent throughout the intermission-less 100 minutes.