Opera Review: ‘The Woman in the Wall’ 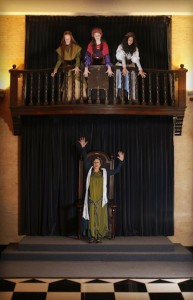 "The Woman in the Wall," a new opeatic work by composer O-Lan Jones and librettist Kathleen Cramer / Photo by Emily Brooke Sandor

There’s something mystical going on at the Masonic Lodge in Culver City, and it has to do with the letter ‘O.’ The Woman in the Wall is a new Opera, composed by O-Lan Jones, with music director/conductor David O. Is it a well-rounded piece of avant-garde performance art, an Opening to the infinite, or just a big gaping yawn? Read On…

This is an odd yet intriguing concept for an opera: years pass in the life of a saintly 14th-century woman who is bricked up inside the walls of a church. Apparently, this dedication to seclusion in pursuit of deep religious contemplation was a well-known lifestyle—if one can call it that—in medieval times. We all know about hermits, who tended to live outdoors in the wilderness, but few know about anchoresses (or anchorites if male) who chose to remain secluded within the community by voluntarily having themselves entombed in church walls, usually until they were carried out feet first. Their tiny cells typically had one small window facing the sanctuary and one facing the street, plus a third for physical necessaries. A number of these so-called anchorholds can still be seen in certain village churches, primarily in England but also elsewhere.

You can probably guess that, as opera goes, this is not going to be Carmen… and it’s pretty far from it. Yet this is a thoughtful and professional production that has much to commend it. It has a 20-actor cast, a 10-person live orchestra playing a mix of Renaissance and modern instruments, and a 22-member chorus with singers from the Angel City Chorale. While there are not any what you might call “hummable” tunes, the music is pleasing and quite in keeping with the period in which we are immersed.

The opera is divided up into seven days, which cover 17 years. We begin with the anchoress Marianne’s entombment and symbolic “death.” We witness her doubts and inner struggle to be worthy. We see her interact with those outside in the village, including oafish peasants, a soldier, a condemned witch and a con man, while the ubiquitous death cart rumbles about. Eventually Marianne’s reputation for good advice comes to the King who visits her and tempts her with an offer of an easy life ensconced in his palace. Her resolution to remain in the wall is supported and celebrated by the four earthly virtues (actors portraying Prudence, Justice, Temperance and Fortitude) as well as—spoiler alert—the three heavenly virtues, Faith, Hope and Love, who emerge in the climactic scene. It all reminds me very much of the early baroque operas of the 17th-century with their highfalutin personifications of virtue and nobility, which always seem to triumph in the end.

The elevated tone and highly stylized presentation is also true of the singing, which has much in common with the early opera seria emphasizing recitatives with drawn-out arias. This could be okay if the singer was truly compelling, but Gretchen Johnson in the title role was just not hitting the mark for me. Her speech-teacher diction and overly warbly vibrato made comprehension of the English libretto, written by Kathleen Cramer, very difficult (luckily there was a printed copy of the libretto available to follow along). More impressive was Eric Castro as The King, who had a commanding presence and was much more easily comprehendible.

There is a bit of a problem baked in to this opera’s concept: because of Marianne’s purity and holiness, she is a singularly undramatic figure. Except for a few moments of self doubt, her character eschews passion, and without any romantic tension things feel a bit flat. We do get some sanguinity from other sources, like a dramatic witch-burning scene and some earthy food and sex humor, but at the center of the opera is Marianne and she is just too… beatific. Fortunately, as a counterpoint, the music became more and more interesting and dramatic as the opera moved toward the climax.

One feature of the opera I thought worked surprisingly well was the venue chosen for the performance. I had never been in a Masonic Lodge before, and it was fascinating to absorb all the symbolism within the space of the Great Hall, which imparted a special resonance to the mystical mood. At times, it almost felt like I was taking part in some kind of secret Masonic ceremony, watching figures in cloaks and hoods flitting about. I suspect it was about as close to an induction into the mysteries as I will ever get.

During intermission, I was browsing around the bookshelves in the anteroom to the performance hall when I looked up and noticed four plaques: Prudence, Justice, Temperance and Fortitude. Could it be that the composer had visited this space years before and gotten inspired to write this opera? I put the question to O-Lan Jones who said, “Oh no, it was just a coincidence, but I’m pleased it worked out that way.”

Nevertheless, there is a plaque at the entrance to the Hall that says, “The beautiful sights greeting your eyes in this room are for the delight, adoration and enjoyment of all who are in search of brotherly love, relief and truth.” Quite true and quite apt.