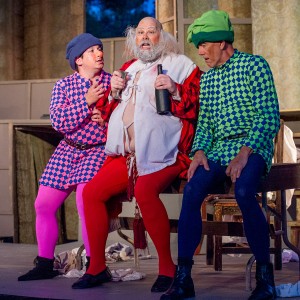 If you’ve never been up to Glendale’s Forest Lawn cemetery, you should go. There aren’t any tombstones, only grave plaques set into the ground, so the setting has the appearance of a verdant mountainous park. Not even a spot of burned-out, drought-parched grass here either, unlike most of L.A. these days. It’s also a wonderful venue for Falstaff, Pacific Opera Project’s season opener. Attendees sit at tables facing the stage outside in a courtyard of the Church of the Recessional at the very top of a tall hill overlooking the East Valley.

Falstaff is Giuseppe Verdi’s last opera (opening in 1893) and his only comedy (not counting a single performance flop more than 50 years earlier). Despite Falstaff’s lack of traditional arias and grand choruses, some feel that Verdi saved his best for last. In Falstaff we find a master of melody in top form, regaling the audience with a broad palette of tone, rhythm, texture and harmonies. His librettist, Arrigo Boito, deserves equal credit for crafting an indelible portrait of a vain man of massive appetites and stupendous foolishness.

Adapted from Shakespeare’s storyline from The Merry Wives of Windsor, Falstaff recounts the tale of a repulsive, corpulent oaf who believes he is an irresistible seducer of women and sends identical love letters to two women. After comparing notes, the women (Alice and Meg) decide to get revenge on Falstaff and at the same time thwart Alice’s husband’s plan to marry off their daughter to an old but rich codger.

In Falstaff it’s all about the main character and Artistic Director Josh Shaw got it right by casting Zeffin Quinn Hollis as Sir John Falstaff. Despite an ill-fitting fat suit and fake-looking bald pate with clown hair, Hollis gets the mannerisms of this vain, boastful glutton just right. With squinty mischievous eyes, he struts across the stage like a king rooster and orders his lackeys about with the imperiousness of a duke. Of course, Falstaff is merely a knight, and a cowardly one at that, but his air of self importance provides endless opportunities to laugh at his fecklessness. Luckily, Hollis’ baritone voice is strong and projects well, a necessity to overcome the wide open space of the mountaintop aerie.

The quality of the other singers is uniformly high as well. Rebecca Sjöwall as Alice (pronounced Ah-Lee-Chay in the Italian style) has an impressive bell-like clarity of tone, and baritone Daniel Scofield playing her husband Ford showed considerable authority as well. The lovers Nannetta and Fenton, played by Annie Sherman and Nadav Hart, were touching in their tenderness. The fact that both of these young talents are coming out of colleges (Stanford and UCLA) that are more known for producing tech and science wizards is an encouraging affirmation of arts education at our top California universities.

I happened to be seated nearly next to the 15-piece orchestra (conducted by Stephen Karr) so the balance between singers and musicians was decent, but in this outdoor venue the sound dissipates quite quickly with distance, leaving a too-faint musical foundation for most of the audience. The sets also left something to be desired, basically an assemblage of platforms that seemed little more than an exercise in carpentry. However, in the final act (which takes place in a magical glade), attention shifts skyward to a skein of glowing, twinkling lights threaded throughout the branches of a sheltering tree, making for a compelling theatrical effect.

Despite the technical difficulties that arise from putting on an opera in such a space, I can only be enthusiastic about the sum of the experience. It is an inspiring location, the singing was excellent, and POP’s very affordable program of selling individual tables with snacks and wine included in the price is just a lovely way to spend a late summer evening.