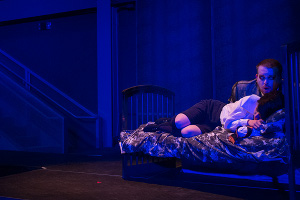 While I have to admit that Benjamin Britten’s 1954 opera based on Henry James’ novella The Turn of the Screw is not my cup of oolong, I was interested to see how the new opera company Pacific Opera Project handled its ambiguous psychological themes. Having been impressed with their wacky Harajuku take on The Mikado last fall, it seemed like there were at least even odds that they could make a silk purse out of the sow’s ear that was LA Opera’s version of the same opera a couple of seasons ago. This opera is actually part of the Britten 100/LA celebration sponsored by LA Opera.

In semi-guerilla style, Pacific Opera Project productions take place in disparate venues where space and availability permit. In Santa Monica, it was a church; here, it is within the “campus” of Inner City Arts, an arts education non-profit. In an otherwise desolate stretch of warehouses east of downtown on Kohler Street, Inner City Arts has created a multi-structure oasis of culture and learning that includes the Rosenthal Theater. It feels like a little bit of an adventure just to get there, but the sleek and lofty architecture of the theater makes for a welcoming space.

The set is comprised of two levels: The ground level is on roughly the same level as the audience, while the live orchestra is unusually mounted high above, behind a scrim. A catwalk runs along one side and in front of the orchestra, providing space for the actors to spread out. Such use of vertical space, along with a small theater size (only eight rows and 140 seats), means that the action wraps around you and you find yourself physically turning to the side to see actors entering or exiting. This close and immersive viewing is not the least of this production’s attractions; to be this close to the performers is a treat rarely encountered in typical opera venues where you must remember to bring binoculars.

The opera opens with a flourish of solo piano, echoed by flashes of light swirling around the space. And so the eerie tone is set for what is essentially a gothic ghost story. The plot revolves around a governess who is sent to care for young Miles and his sister Flora in a rambling country house. Shortly, the governess begins to notice two figures moving about the property that no one else seems to be aware of. It’s not until the children become entangled with these figures that she begins to be alarmed. It seems there were a former governess, Miss Jessel, and another employee, Quint, who had a sexual liaison that led to both of their deaths. It is also implied that Quint may have had a pedophilic relationship with Miles. As the influence of the ghosts comes to predominate, the question becomes: Is the governess insane and is this all in her mind, or are the ghosts real and she (and possibly the children) the only one(s) that can see them?

The meanings of The Turn of the Screw have been hotly debated by scholars for more than a century (the story was first published in 1898). It hardly simplifies things to place the story in its historical context: Henry James was the brother of William James, an eminent philosopher and psychologist who advocated complex theories of thought and truth and also was enamored with mysticism. At the same time, Freud was making a big impact with his theories on the origins of hysteria. So to call this a psychological ghost story seems appropriate.

Fortunately, in this production, unlike the LA Opera production, the psychosexual complexities are suppressed in favor of a more literal and authentically gothic interpretation, which helps the whole affair become more accessible. The zombified ghosts in their shredded clothing are spooky and creepy, and the sense of chill when they appear adds to the fun.

For a low-budget production, the technical aspects are quite good. The moody lighting adds to the sense of foreboding, while the orchestra and most of the singers display a high level of competence. Rebecca Sjöwall (the governess) has a versatile voice and a striking presence; Jennifer Wallace (the housekeeper) shows off excellent vocal techniques; Clay Hilley (Quint) uses his plaintive tenor to good effect, while Marina Harris (Miss Jessel) impresses with her powerhouse vocals.

Although the libretto is in English, the sung words are frequently difficult to understand, and without supertitles to clarify things, a viewer unfamiliar with the work can get left behind. But there is always the consistently inventive music to fall back on; Britten’s impressionistic score, with its surprising turns and discordant punctuations, is strangely appealing and suits the mysterious goings-on of the story very well.

For a young opera company only 30 months old, the Pacific Opera Project under Director Josh Shaw is demonstrating an impressive range of material, from fun and irreverent to the serious and nuanced. We can all look forward to seeing what they do with the upcoming productions of Carmen and La Calisto later this spring.