Paul Simon: Words and Music at the Skirball Cultural Center 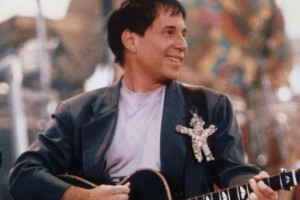 Before Paul Simon got his first guitar, his instrument of choice was the baseball bat. One of his happiest moments was making a headline in a local paper that read “Simon Steals Home.” Though his father was a musician, the young Simon never expressed an interest in music — until he turned on the radio one day for a baseball game and heard a DJ introduce “one of the worst songs” he’d ever heard. Intrigued, Simon listened to “Gee” by the Crows and was suddenly captivated. That 45, along with Simon’s first guitar, given to him by his father on his 13th birthday and used during his early career, is one of the many items on display in Paul Simon: Words and Music at the Skirball Cultural Center through Sept. 3.

On a guided tour of the exhibit — which originated at the Rock and Roll Hall of Fame and Museum and was expanded by the Skirball for this L.A. installation — Robert Hillburn, a former LA Times journalist working on a biography of Simon, shared that story of the famous musician’s inconspicuous beginnings in New York.  Still, Hillburn added, Simon might count the experience of stealing home as more exciting than his 16 Grammy wins.

Curator Cate Thurston followed with a history of Simon’s budding career with Art Garfunkel. The two met at age 11 and started singing together when they were 13. They performed and recorded an album as Tom and Jerry on Big Records in the ’50s. A photo of “Jerry Landis” in an Elvis pose is part of the exhibit. (After the Crows, Elvis was a huge influence.) Also on display is a fun letter Simon wrote to Garfunkel from summer camp, talking about songwriting.

In the ’60s, it was a foray into folk music that put the duo (who dropped the pseudonyms) on a course to commercial success. But it didn’t happen instantly. Their 1964 album Wednesday Morning, 3 a.m. on Columbia Records didn’t fare so well. But then something happened that changed the course of these musicians’ lives forever…. Always an entertaining tour guide, Skirball Director Robert Kirschner shared the story with added detail from Hillburn, about how that album’s “The Sound of Silence” started to gain traction when a late-night DJ, who was an English lit major and liked the lyrics, played it on a Boston radio station. Producer Tom Wilson took the duo’s tracks into the studio and added drums, bass and electric guitar, without input from Simon and Garfunkel. The song was re-released as “The Sounds of Silence.” Simon hated it; on top of everything, the guitar was out of tune. He didn’t want to release it, but it was too late — and that version soared to the top of the pop charts. The rest, as they say, is history.

Paul Simon: Words and Music covers the musician’s six-decade career, solo since he and Garfunkel parted ways in 1970. After three acclaimed albums over the next five years, Simon suffered a couple of flops. He composed some music inspired by South African music, but was told such an album wouldn’t sell. Hillburn said he wasn’t selling albums anyway, so he gave it a shot and came up with the landmark 1986 album Graceland, which featured the South African male choral group Ladysmith Black Mambazo.

Kirschner said the Skirball chose to mount the Paul Simon exhibition not only because Simon is a famous Jewish musician, but specifically because his music has built community and bridged cultures over the decades. His music is infused with hope and brings people together in positive ways.

Accordingly, one of the new additions to the exhibit is a music lab, created exclusively by Roland Corporation U.S. for the Skirball, in which visitors can interact will Simon’s recordings. Music fans can join an electronic drum circle and keep the beat to “Cecilia,” manipulate tracks for “Me and Julio Down by the Schoolyard” and “Wristband” using mixing equipment, and more.

In addition to guitars, albums, photographs, handwritten lyrics, sheet music and costumes, the Skirball has set up listening stations and video screens with interviews and performance footage, as well as a loop of “Saturday Night Live” appearances. The exhibit begins with a (completely recognizable) photo of Simon as a toddler and ends with a portrait by Chuck Close that became the album cover of his 13th solo release in 2016: Stranger to Stranger.

Some highlights include a music sheet for “Bridge Over Troubled Water,” incorrectly printed as “Like a Pitcher of Water” by arranger Ernie Freeman, lyrics for “The Boxer” scrawled on an in-flight magazine, and a letter from artist Rene Magritte’s sister sent to Simon in answer to his request to reprint the photo that inspired his song “Rene and Georgette Magritte With Their Dog After the War.” Fun trivia gleaned from the exhibit: “Mother and Child Reunion” is a title taken from a dish on a Chinese menu that includes chicken and egg, and “Mrs. Robinson” started off as “Mrs. Roosevelt” before director Mike Nichols contacted Simon for the soundtrack for “The Graduate.”

Thoughtful, informative and entertaining, Paul Simon: Words and Music expresses the Skirball’s mission: to “welcome people of all communities and generations to participate in cultural experiences that celebrate discovery and hope, foster human connections, and call upon us to help build a more just society.”

On Friday, May 12, at 8 p.m., the Skirball presents a screening of the Emmy-nominated documentary Under African Skies, which traces the turbulent origins and lasting impact of Paul Simon’s landmark album Graceland. Prior to the screening, the public is welcome to enjoy rare evening museum hours and gain free admission to Paul Simon: Words & Music from 6 to 10 p.m. At 7 p.m., Museum Director Robert Kirschner will lead a tour of the exhibit. Cash bar and food trucks will be on site. Reservations for the late-night event and ticket sales for the film screening are open at skirball.org.