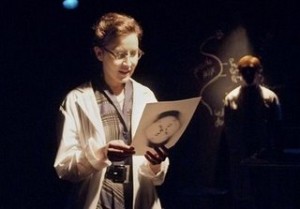 Considering that British biophysicist Rosalind Franklin played a crucial role in one of the 20th century’s greatest scientific discoveries, it’s incredible that she is virtually unknown. That’s one reason that Anna Ziegler’s “Photograph 51,” playing at the Fountain Theatre in Hollywood through May 3, is so engaging.

The play, like Franklin’s life, is definitely a tragedy. In the early ’50s, Franklin came extremely close to figuring out the structure of DNA in her research using x-ray diffraction images. The most significant of those images, Photograph 51, was the key to geneticist James Watson and biophysicist Francis Crick’s successful model of the double helix. Franklin did not know that her research partner Maurice Wilkins had showed Watson and Crick the photo, and therefore had no regrets that she had lost the race to discover the “secret of life,” in which Caltech’s Linus Pauling, another famous male scientist, was also a competitor. When Watson, Crick, and Wilkins shared the Nobel Prize in 1962, Franklin again had no regrets – she had died four years earlier of ovarian cancer at the age of 37.

Aria Alpert is properly stoic as our heroine, who arrives at King’s College in London in 1951 and rather quickly puts her weaker colleague Wilkins in his place. But Alpert rarely seems to break from that emotional indifference. I wished the script could have revealed more of the private side of Franklin, because, as it’s written, Alpert is barely able to give us glimpses of that in the soliloquies. Though this is Franklin’s story, her character remains something of a mystery to us.

Daniel Billet’s socially awkward Wilkins elicits some sympathy as the rejected love interest who never falls out of love with Franklin. When he secretly shares her photograph with Watson and Crick, who constantly pump him and Franklin for any information they can get, he does so out of excitement rather than an attempt at sabotage. But when he calls the ambitious Watson (an entertaining, high-energy Ian Gould) and Crick (a comparatively reserved Kerby Joe Grubb) “rogues,” it’s hard not to think he is no less of one, or maybe more of one, for keeping the woman he loves in the dark and, later, not making sure her extraordinary contributions are recognized.

It’s not as if Franklin is a stereotypical asocial lab scientist. Doctoral student Ray Gosling (Graham Norris) gets along with Franklin remarkably well in the lab and talks to the audience (perhaps unnecessarily) while adding some moments of humor. Ross Hellwig is the gallant Don Caspar, the Yale scientist with whom Franklin corresponds through letters and finally has a date.

The play ponders whether Franklin was a victim of a sexist system or of her own failure to establish professional relationships. But it is indeed difficult to fault Franklin for her desire to work alone and analyze her own data in a world where King’s College had a dining room that did not allow women, Watson and Crick are shown analyzing her looks while she gives a scientific presentation, and Wilkins, despite his personal feelings, never seemed to respect her as a colleague.

Director Simon Levy effectively steers the actors through a human drama, and there is an emotional swell at the end. Yet there is also a sense of disappointment. It is oddly jarring to have all five male characters surround the deceased Franklin and throw out possible reasons she failed to be recognized for her work. Furthermore, the final dream sequence with a sorrowful Wilkins trying to figure out where he went wrong loving her is a strange note on which to end the show, further emphasizing how we learn much more about his private thoughts than our heroine’s.