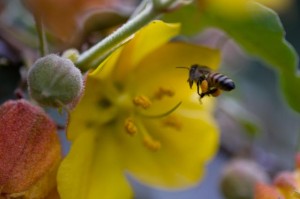 As Descanso Gardens‘ first artist-in-residence, photographer Christine Burrill has been exploring the spring blooms up close over the past month, zooming in on birds of paradise, yellow tidy tips, and roses wet with dew. Her prints will be on view at Descanso Gardens on Sunday, May 3, and she will talk about her experience capturing them in “The Pause of Focus: Photography as Meditation” from 2 to 4 p.m.

Burrill has been focusing on macro photography of flora for several years. As the title of her talk implies, her approach is almost Zen-like. Burrill says she finds photography “contemplative and meditative,” not just the time spent with the camera in the gardens, but also the work afterward, reviewing every frame and “making it perfect.”

“It slows you down,” she says, “nature does in general, but especially photography.”

Burrill’s images have a haiku-like simplicity, capturing with precision the most exquisite and easily overlooked details in nature. During her residency, she discovered a newfound appreciation for roses while photographing them on a recent dewy morning, but the wildflowers in the California native section remain her favorites, even as masses of bees swarmed around some of them. “The bees were not interested in me,” she says, “which was good.” 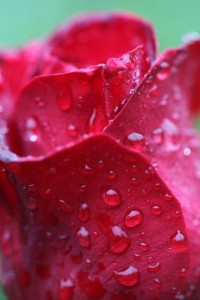 A USC Film School graduate, Burrill has spent more than 30 years behind the camera and has worked extensively as a cinematographer and writer of documentary films. One of her projects was the Dixie Chicks’ “Shut Up and Sing.” But she sees her still photography as a creative escape from her work on documentaries, which entail following people around and waiting for a story to unfold and for dramatic moments to occur.
While working on a film in the Brazilian Amazon, Burrill snapped photos of the indigenous tribes and, inspired by David Hockney’s concept of the photo collage, combined dozens of individual prints to form massive, almost motion-picture images. She has exhibited that series and other work in South America, Europe and the United States.