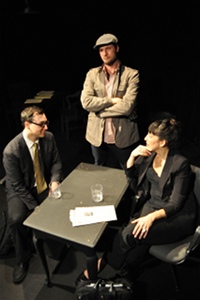 “Pieces,” currently at the Complex Hollywood Flight Theatre, ignites with a strong cast of five, tightly reined by director Brian Zimmer in their compelling interpretation of Chris Phillips’ powerful script.

Phillips’ intense script cleverly misdirects your focus with dialogue duplicitous in its meaning and intent.  It seems like anything said about one person or group can be re-interpreted to apply to another person or group.

“Pieces” centers on the preliminaries of the murder trial of Shane Holloway (played sometimes flirty and confident, then other times hopeless and lost by a very effective Chris Salvatore). This 20-something twink has been accused of fatally stabbing his rich keeper, an older, successful Hollywood producer with a reputation for keeping a never-ending supply of handsome twinks at his beck and call.

The opposing counsels happen to be long-time friends, as the prosecutor Mary Hamilton (the wonderful Nina Millin) pulled strings to get Rory Dennis (Jonathan Gibson) assigned as Shane’s public defender. Aggressive blogger/reporter Nick Goff (Joe Briggs) stalks both lawyers attempting to get the inside scoop on this headline-making gay murder trial.

Once the play’s interrogation lamp comes off Shane and the spotlight settles on Rory, Rory’s deep, deep hidden biases reveal themselves. Both Mary and Nick question Rory’s real intent in defending Shane in what Mary sees as a slam-dunk case for the prosecution.

The scene between Rory and Nick where Rory unloads a diatribe of his dislikes amazes!  Gibson unleashes his verbal torrent of pent-up emotions and realizations brilliantly! Wow! And Briggs deftly handles Nick’s stunned responses with spot-on hesitation and compassion as needed.

Also involved in these pre-trial complications, Paolo Andino hits all the right notes with the right posturing, right car (a BMW), and right clothes as Jonathan Nielson, the very successful gay film publicist who initially introduced Shane to the murder victim.

Message plays can be preachy when not put together correctly. “Pieces’” is a message play done very right. “Pieces” seduces you into an entertaining tale of stereotypes. Then when you’re totally involved with the characters, the stereotypes become twisted and turned upside-down and exposed.

Kudos to all connected with “Pieces.”  I would love to see this play produced with a larger production budget. The combination of this production’s writing, acting, and direction was strong enough to overlook the many times the actors walked and talked out of their light.

Performances continue through May 6 at the Complex Hollywood Flight Theatre, 6472 Santa Monica Blvd., LA 90038. Show times are Thursdays through Saturdays at 8 p.m., Sundays at 3 p.m. (no Thursday, May 3, performance). For tickets, visit http://www.brownpapertickets.com/event/233226.