‘Playboy of the Western World’ 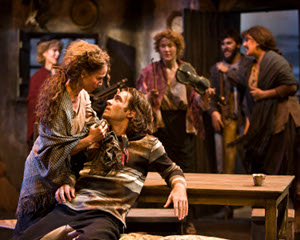 An increasingly agitated audience greeted the world premiere of J.M. Synge’s The Playboy of the Western World at Dublin’s Abbey Theater in 1907.  Good Irish lads sang patriotic songs and shouted, “Kill the author!” Howls of outrage escalated to fistfights, culminating in an actual riot. At subsequent performances, young hotheads sat in the front rows whistling, stamping and shouting to keep virtuous Irish folk from hearing the offensive play. Eventually, nearly 500 police had to be called in to quell the violence.

The main causes of the brouhaha were the unsentimental way in which Irish peasant life was portrayed, the comic treatment of supposed manslaughter, and what Sinn Fein called “the foulest language we have ever listened to on a public platform.” P.S. – The indecent language was the single word “shift,” a woman’s undergarment.

A Noise Within, Southern California’s only year-round classical theater repertory company, concludes its 2009-10 season with Synge’s The Playboy of the Western World, onstage through May 22.

Describing Playboy as Shakespearean in scope, director and ANW co-founder Geoff Elliott notes that at the time it was written, the conflict and tensions between Catholics and Protestants in Ireland were extremely high. “For an actor to say anything on stage detrimental to the Irish character was bound to cause trouble,” he says.

Synge created people who are unworldly, small-minded, immoral, and full of blarney. But they also sing their lives into full-blown artwork, their poetic, romantic speech a tapestry woven of wish, imagination, and incantation.

Playboy was described by Synge contemporary William Butler Yeats as “picturesque, poetical, fantastical, a masterpiece of style and of music, the supreme work of our dialect theatre.”  It was Yeats who had advised John Synge to go to the Isles of Aran to observe the people and learn their language, saying, “Express a life that has never found expression. Live there as if you were one of the people.” The result is a musical lyricism of speech in Synge’s work, at once beautifully rhythmic and evocative of a special Irish turn of phrase.

ANW’s production homogenizes the considerable talents of a large creative team. Introduced by authentic Irish music courtesy of sound designer Matt Richter, this Playboy opens in set designer Stephen Gifford’s atmospheric tavern/cottage by the sea — as realistic an Irish croft as ye’d be imagining, from the thatched roof to the wee bar with its locked whiskey cabinet to the downstage fireplace. Lighting designer Ken Booth gives us a fire-lit, smoky, claustrophobic interior. Costume designer Soojin Lee’s clothes are as earthy and careworn as the characters she dresses.

Tavern keeper Michael Flaherty is played with vigor and charm by ANW resident artist Apollo Dukakis, who concurrently plays Leonato in the company’s Much Ado About Nothing. Lindsay Gould — Hero in Much Ado — plays Flaherty’s sharp-tongued young spinster of a daughter, Pegeen Mike. Gould’s determined Irish brogue, at first unintelligible, grows more relaxed and musical as the evening wears on. In his ANW debut, Brian Hostenske endearingly bumbles as Pegeen’s timid suitor, Sean Keogh. Michael Newcomer — ANW’s Raskolnikov last fall — plays the braggart wanderer Christy Mahon, and a bonny figure of a lad is he. Christy arrives at the pub soaked to the skin and hungry, and on the run from the police. His physical beauty and his story of having killed his bullying father make him an object of fascination for the women and girls of the small community. Longtime ANW resident artist Jill Hill is the Widow Quinn, Pegeen’s rival for Christy’s affections. Ah, the rewards of patricide. Says Christy, “Two fine women fighting for the likes of me — till I’m thinking this night: wasn’t I a foolish fellow not to kill my father in the years gone by.”

The splendid William Dennis Hunt brings down the house in a tour de force cameo as Philly Cullen. Says Hunt, “That entrance was a real gift from the playwright!”

Spoiler alert — Christy’s ‘dead’ father comes to life with majestic voice and grand breadth of gesture in the body of director Geoff Elliot.