‘Proof’ at the Hayworth Theatre 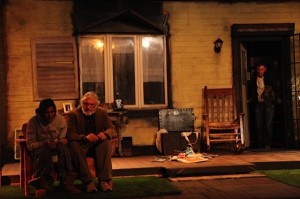 “Proof” centers on Catherine, a possibly brilliant mathematician who may or may not have inherited her father Robert’s mathematical genius and/or his mental illness. Putting her own college education on hold, Catherine has been her father’s caretaker for the last five years.  He has long bouts of madness with intermittent spurts of sanity.  Catherine justifiably (or not) resents her older sister Claire who gets to live her own life in New York, all the while paying the many bills to support the unemployed Catherine and their demented patriarch in Chicago.

“NCIS: Los Angeles’” Daniela Ruah has the unenviable task of making Catherine sympathetic enough to want to spend almost two hours in a theater with her.  James Whitmore, Jr. plays Robert as an oft-times lovable oaf with spells of intellectual virtuosity amidst his frequent states of confusion.  As Robert’s protégé Hal, Dustin Seavey succeeds in conveying his enthusiastic determination to uncover the significance in his mentor’s writings. Seavey also nails the geekiness in his so un-slick seducing of Catherine. Aliah Whitmore imbues Claire with just the right blend of sisterly concern and frustration with the ever-pendulant, combative Catherine. Whitmore also doubles as director, directing her two leads to perform their lengthy speeches with high intensity and volume.

Verbal references to the time of day made throughout the play seem to be the only way to determine the time of day in the detailed backyard set because lighting never changes. Curiously, a front door to the house and a kitchen door both lead to the backyard, with a skull-encrusted tree inexplicably standing on the side of the backyard. There are no attempts in technical production to telegraph present vs. flashbacks either.