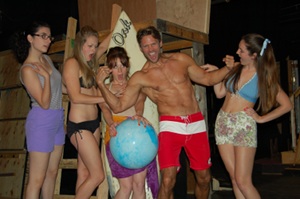 A revival of Charles Busch’s 1987 camp classic “Psycho Beach Party” has been mounted at the Morgan-Wixson Theatre with mixed results.

Busch has a reputation for being a little off-center in his entertainment pieces.  He had previously taken upon himself to essay “Psycho’s” lead ingénue role of the virginal Chicklet to great acclaim. “Campy” would be a frequent description of Busch’s theater creations. This spoof of the 1960s beach blanket movies is about a teenage girl with multiple personalities breaking into an all-male surfing club.

At the Morgan-Wixson, Chicklet is played by a young, age-appropriate actress Taylor D’Andrea, who though definitely not overweight is undeniably not “a stick” in figure as described in the script. Most of the actors cast don’t look like buff, tan Malibu surfers from1962.

The beach set designed by Thomas A. Brown, though traditional, gets a clever assist from a movie-screen backdrop of filmed sunsets and ocean waves.  Sound effects signaling Chicklet’s multiple personality changes occur so inconsistently, they do nothing to enhance the transitions. Willam Wilday directs his attractive cast in a straightforward and realistic manner. These elements, as well as a rather long party dance sequence, add up to a very non-campy show, which can’t be what Busch originally intended.

The strongest element of this production, Tim Herzog has the right look (bronzed bodybuilder muscles), the right commanding stage presence and the right amount of camp acting chops for his role as Kanaka, the King Surfer of this beach.  Some of the better performances include: Heidi Appe as Chicklet’s controlling mother, Caitlin Jemison as the glamorous movie “actress” (not “star”) Bettina Barnes, Emily Kottler as Chicklet’s BFF Berdine, and Isaac Deakyne as Yo-Yo, the surfer dude with a preference for interior design and setting hair.

Kudos to Morgan-Wixson for keeping in this production the scripted four-letter words and the guys kissing.