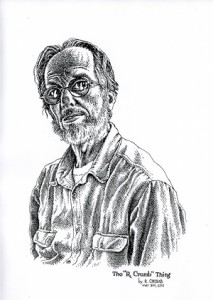 What are comics?  The Sunday funnies are one thing; franchised superheroes are certainly another. Between World War II and the rise of television, a pastiche of super-heroism and sexy, gory pulp fiction made the heyday of widely read comics, but the period was quickly censored into obscurity.

R. Crumb, UCLA Live‘s most recent literary guest, is a part and pioneer of what came next: underground comics. Changing the face of drawn American heroism, work like in “Zap Comix” of the late 1960s was loud and explicit, engaging the very qualities that had pushed the medium beneath the cultural surface.

On Oct. 29, in a rare public appearance, Crumb spoke to a packed Royce Hall. In a conversation with Françoise Mouly, his friend and art editor at “The New Yorker,” he spoke with humor about his life and family, his work, and his latest publication, “The Book of Genesis Illustrated by R. Crumb.”

Through photos and drawings from Crumb’s childhood, and discussion of his work at American Greetings, in underground comics, and with his wife Aline Kominsky Crumb (a pioneer in her own right), Mouly smoothly contextualized Crumb’s development as an artist and storyteller. The correlation between life and work apparently began early:  Crumb laughed at a gapped-tooth school picture and cited “Mystic Comics #3,” called “Don’t Tempt Fate” after a predictable flying object knocked out a pearly white. In an image from the comics he drew as a kid, his brother’s text bubbles slowly overcome the drawings – that brother, Crumb said, later decided just to write.

The most impressive aspect of Mouly’s direction was how it prepared the audience for “Genesis.” Its text comes directly from the King James Version and Robert Alter’s translation, and the author calls it a “straight illustration job.” His signature visual style remains, but the five-year project is a departure from what Crumb fostered in American subculture – a temporary departure, Crumb joked at Royce Hall. “I’m totally sick of the Bible.  I’m going back to drawing pornography!” The “Genesis” images are a direct reflection of the text, even resisting the Crumb’s typical visual humor. After several of his pictorial jokes had crossed the screen, Crumb’s point became clear: they’d have been distracting in the new book.

The chaotic Q&A session ended the evening disappointingly. Its grand finale was “What’s your hat size?” Nevertheless, perhaps the best round of applause (and there were many) came when Crumb was asked about his handiwork. Opting out of the digital arts, he creates every panel and page with an ink pen.

This UCLA event coincides with “The Bible Illuminated,” a Hammer Museum exhibit of each page in the new “Genesis.”  Furthermore, the conversation-cum-history-lesson offered a foundation for upcoming events in the Spoken Word series at UCLA Live.  New styles and autobiography have transformed the graphic narrative into a topic of study for academics and Hollywood types alike. Neil Gaiman arrives in February. The English artist and writer has won literary recognition for his “Sandman” books and major studio production of his “Coraline.”  The aptly titled “Titans of the Graphic Novel” will feature Harvey Pekar, whose “American Splendor” stands as one of the most recognizable autobiographical comics in the American canon, and Alison Bechdel, whose own somber story in “Fun Home” spent two weeks on the New York Times best-seller list. “Fun Home’s” complex and personal matters, the style of “American Splendor,” and the thorough narrative of Gaiman’s works echo the aesthetic tradition of comics while breaking new ground – thanks in great part to the history of Crumb, so thoroughly presented at the Oct. 29 event.