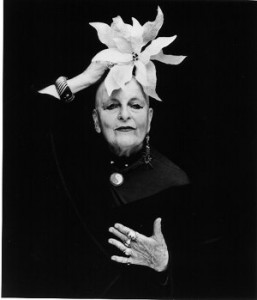 How often does it happen that an art world giant has a big birthday and we’re all invited to the party? Well, Track 16 Gallery in Santa Monica provides just such a rare opportunity when it hosts “Rachel Rosenthal’s Birthday Bash 83” on Saturday, Nov. 7, from 7-11 p.m.

Rosenthal, an iconic interdisciplinary performance artist, was named a Living Cultural Treasure of Los Angeles in 2000. As artistic director and founder of the Rachel Rosenthal Company, she developed revolutionary performance pieces and teaching methods inspired by Jean-Louis Barrault’s concept of total theater and Antonin Artaud’s Le Theatre et Son Double. She has performed all over the world, often focusing on subjects such as animal rights and humankind’s impact on the planet. Entertainment Today said: “There is nothing quite like a Rachel Rosenthal artistic materialization. Seeing (her) and experiencing her after-show discussion session firsthand is like sitting for a few minutes with Plato, listening to Rousseau or Jung or Thoreau speak in person. An evening with Rachel Rosenthal will stay with you a lifetime; do it for your future.” Check out Rosenthal’s YouTube Channel for a glimpse of her work.

The Nov. 7 party celebrates not only Rosenthal’s 83rd birthday but also the Rachel Rosenthal Company’s new TOHUBOHU! Extreme Theater Ensemble and her new book “The DbD Experience – Chance Knows What It’s Doing!” (where DbD stands for Doing by Doing, Rosenthal’s signature brand of improvisational theater). Live music will be provided by Amy Knoles from the California E.A.R. Unit and Jean Paul Monsché of the Mad Alsacians. An auction will include 83 abstract, conceptual and representational portraits of Rosenthal by established and emerging artists including famous names such as John Baldessari, Ed Ruscha, Mike Kelley, Betye Saar and Robert Rauschenberg. Proceeds from the auction will benefit the new theater ensemble and fund student scholarships and visiting artist stipends.