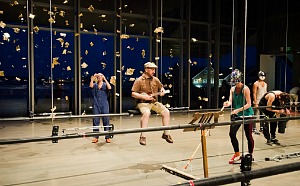 With what promotional materials describe as a “beguiling” visual design created by San Francisco installation artist Ali Naschke-Messing and lighting design by Davison Scandrett, the evening-length dance is performed by a company of three, in addition to those already mentioned.

Labeled as a one-of-a-kind collaboration that celebrates the “mysteries” of performance, the production attributes its inspiration to a quote from photographer Richard Avedon: “We all perform. It’s what we do for each other all the time, deliberately or unintentionally. It’s a way of telling about ourselves in the hope of being recognized as what we’d like to be.”

The choreographer’s history includes being a member of the world-renowned Merce Cunningham Dance Company, and Merritt (with or without his band) has achieved international acclaim for his music. The piece was developed during a residency at the Institute for Contemporary Arts (ICA) in Boston and premiered there in 2013.

From what this writer can tell from Youtube and publicity links, this production pushes the edges of the envelope way out in its mix of art forms, stage value, expectations and concept.

REDCAT is located in downtown Los Angeles inside the Walt Disney Concert Hall complex with a separate entrance at the corner of West Second and Hope streets. The address is 631 W. Second St., LA 90012. Parking is available in the Walt Disney Concert Hall parking structure. Tickets are $25-$30 (students/members $20-$25) and can be purchased at http://www.redcat.org/event/rashaun-mitchell-stephin-merritt-ali-naschke-messing-performance.