Rauschenberg and Cage at Armory Center for the Arts 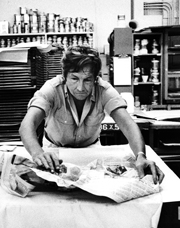 “Rauschenberg at Gemini” continues through March 21  at the Armory Center for the Arts. Curator Jay Belloli has assembled many of Robert Rauschenberg’s most famous prints, print series, and multiples produced between 1967 and 2001 at Gemini G.E.L., the world-famous multiples workshop in Los Angeles, which was organized in 1966 and is still run by two of the founders, Sidney Felsen and Stanley Grinstein. Gallery hours are noon to 5 p.m. Tuesday through Sunday.

Southwest Chamber Music will perform two concerts with music by Rauschenberg’s friend, composer John Cage, in the Caldwell Gallery. The Rauschenberg works surrounding the musicians will be from the Stone Moon Series, Samarkand Series and Cardbird Series, and feature the first poster for Earth Day. The Saturday, Jan. 23, concert will include a performance of Cage’s landmark silent piece, 4’33”. The Saturday, Feb. 6, concert will include “Litany for the Whale.” Tickets for each  8 p.m. performance are $10 – $38. For information, (800) 726-7147, www.swmusic.org