Re-Animator the Musical at the Hayworth Theatre 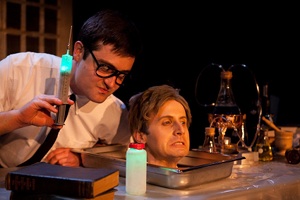 Graham Skipper and Jesse Merlin in "Re-Animator: the Musical" at the Hayworth Theatre / Photo by Thomas Hargis

Based on the 1985 cult classic “H.P. Lovecraft’s Re-Animator,” “Re-Animator: the Musical,” currently at the Hayworth Theatre, takes enthusiastic audiences to a new high, or should I say a new low, as in the best of lowbrow.  Think Saturday afternoons in front of the old black-and-white television watching cheesy sci-fi flicks in which you can tell the attacking monster towering over the skyscrapers is really a 6-inch toy robot. If dodging spurting blood is a welcome challenge, this show’s perfect for you!

Director Stuart Gordon has the very talented cast singing, dancing and dying in multiple speeds of fast, faster and fastest — all to maximum effect.  The audience barely has time to breathe between laughs and screams and moans in this quick hour-and-a-half spectacle.

All these wonderful actors portray their insane characters with 150% craziness and conviction. (Well, only one character would be considered sane.) The cast is the original from the Steve Allen Theater, where the show enjoyed a long run.

The plot follows a uniquely brilliant medical student named Herbert West (played by the committed, manic Graham Skipper with a Charles Manson stare) who enrolls in med school to “steal” back his mentor’s medical discovery pilfered by its head professor Dr. Carl Hill.  You have to wonder: Is West brilliant? Is he insane? Is he brilliantly insane or insanely brilliant?

Jesse Merlin as Dr. Hill alternately creeps you out, then sings like a commanding operatic lead baritone. The med school is run by Dean Halsey performed by the master of a comic reaction, George Wendt from “Cheers.”

West rents the available basement of fellow med school student and sensitive hunk Dan Cain (Chris L. McKenna with stage presence to spare) who happens to be dating the dean’s beautiful daughter Meg Halsey (Rachel Avery is very effective in the sole role of sanity). One could marvel and appreciate the collective stunning vocal talents of West, McKenna, Merlin and Avery, if one weren’t so busy laughing and screaming — and dodging spurting blood.

All technical aspects in this production deserve shout outs for greatly adding to the enjoyment of this show: the multi-functioning one-door set piece designed by Laura Fine Hawkes, the music and clever lyrics by Mark Nutter, the perfectly timed sound effects interspersed between and during the melodic synthesizer stylings of David O, and the costumes reminiscent of the graveyard scene in “Night of the Living Dead” successfully executed by Joe Kucharski.

What you will most likely talk about after leaving the theater will be the very effectual special effects and makeup (from the brilliant minds of the original movie’s Tony Doublin, John Naulin and John Buechler, now joined by Greg McDougal and Tom Devlin).  These visual geniuses maximize the cheese factor with a lot of the aforementioned spurting fake blood, phony limbs, detaching eyeballs, decapitated heads, a cat puppet, scary hypodermics, and the amazing set of human innards that you have to see to believe.

Warning: DO NOT wear your designer clothes. DO put on the plastic ponchos the theater offers you. A lot of fake blood squirts into the audience!

This award-winning musical will be delighting and horrifying LA audiences for a limited run before performing in New York and the Edinburgh Fringe Festival.