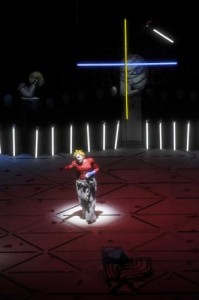 With the recent closing of LA Opera’s Götterdämmerung, the circus has packed up and left town. But like a classic rocker’s farewell tour, this motley crew will soon be back for an encore performance — despite the grumbles of ‘good riddance’ that lately have been ricocheting around town from more than a few opera fans. Starting May 29, all four of Richard Wagner’s gargantuan operas of Norse myth will be presented in three complete performances, known as the Ring Cycle. For some, this will amount to nearly 20 hours of bewilderment, sneering, and even anger. But for many others, it is anticipated as the apotheosis of the modern operatic experience. For me, I’m hovering somewhere in between.

For the final installment of the cycle, director Achim Freyer has once again broadsided us with his cavalcade of cartoon heroes and villains. For those initiated into Freyer’s eye-popping world for the first time, you can’t help but be entertained by the novelty of it all, whether you ultimately like it or not. Freyer undeniably has a surfeit of ideas and imagination, and you never know what is coming next. But having seen the previous installments, I have to admit to a tiny bit of weariness with the whole effort, as if I was attending a terrific modern art exhibit for the fourth time, with the artworks more or less rearranged after each visit. Nothing wrong with Modern Art, but this version is full of arcane symbolism, evident at every moment of the production. It’s an experience comparable to watching Bergman’s The Seventh Seal — the European avant-garde sensibility can be fun to grapple with, but it is also quite opaque at times. Granted, a lot more of this would probably be decipherable to those with a sound knowledge of Icelandic mythology, but I, for one, am sorely lacking in that regard. Many gestures and symbols appear to have no comprehensible meaning whatsoever — you get the feeling they have been included in jest or merely for a visual flourish. During intermissions, it was comical to hear attendees asking each other what this meant or what that meant, with plenty of shoulder shrugs and head scratching all around.

Yet there is a lot to like here — if you take it on its own terms. People who denigrate this production as unfaithful to Wagner’s intentions miss the point. This is less an interpretation of Wagner than a reimagining through the eyes of a contemporary artist — Freyer.  On the surface, he gooses you with his visual playfulness and titillates with burlesque sexual imagery — all presented through a pop-culture filter that provides glimpses from such disparate films as A Clockwork Orange, Star Wars, and The Wizard of Oz. But the currents run deeper than the often circus-like atmosphere. With the entire cast effectively masked and bearing little relation to actual humans, Freyer severs our connection to the traditional notions of character. He also sets us adrift on a continuum of time, mingling images of the present — like the kinetic computer codes projected on the wall — with those of the past and the future too. With these two lifelines cut, we are forced out of the traditional historical narrative with Vikings striking poses, to a slippery and indeterminate realm where there is little for us to hold on to. For some this will be simply annoying, but for others it is bound to be liberating, spurring new and profound questions about our own fate.

Technically speaking, Götterdämmerung is more static than the other Ring operas; characters spend a lot of time rehashing the back story. At the same time, the actors are less burdened with restrictive costuming, allowing them somewhat more freedom of movement. I found the stagecraft to be a mix of the ridiculous and the sublime: the hinged cardboard cutouts that the characters posed behind for much of the second act seemed needlessly goofy, like something out of a grammar school play, yet the final conflagration at the end was worthy of cheers. The entire set deconstructs as props, singers, even walls rise up into the air and banks of lights descend to glare into our faces. Everything falls away to reveal the artifice of the theater itself — the wings and backstage — while the flames devour all and the world/theater comes to an end.

As for the singing, this isn’t the kind of production to showcase any superstar standouts. The cast works well as an ensemble and everyone pulls their weight competently, although I found the two leads, Linda Watson as Brunnhilde and John Treleaven as Siegfried, in the end more memorable for their bizarre appearance than for their singing. Behind it all is Wagner’s sumptuous 19th-century romantic score that frankly seems to exist in a somewhat different dimension than the drama. But it sounds sensational, if slightly lacking in force due to the orchestra being more tucked away than usual. Cheers to James Conlon who expertly takes us through nearly four hours of this haunting music, which includes such Wagner favorites as “The Rhine Journey” and “Siegfried’s Funeral Music.”

Audiences will remain bitterly divided over the merits of this production (Freyer was greeted with loud boos mingled with cheers during his bows at the end), but whatever the individual reaction, LA Opera is to be applauded for its bold stance in giving a quirky but talented artist like Freyer the copious resources needed to create a unique and compelling spectacle, the likes of which is rarely seen.