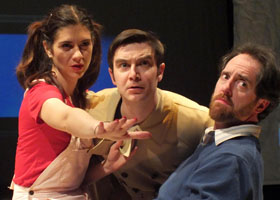 Gilda (Erin Pineda), Everyone Else (Tom Fonss) and Alan (Brendan Hunt) in “Bunny Bunny – Gilda Radner: A Sort of Romantic Comedy” at the Falcon Theatre / Photo by Chelsea Sutton

Fans of “Curb Your Enthusiasm,” “It’s Garry Shandling’s Show” and the early seasons of “Saturday Night Live” will be familiar with Zweibel’s brand of sharp, naturalistic humor. “Bunny Bunny” exposes his 14-year relationship with comedienne Gilda Radner.  Initially meeting on their first jobs on SNL, Gilda and Zweibel hit it off professionally; then, slowly, personally. (Gilda always addresses him as Zweibel.)

Brendan Hunt smoothly inhabits his role of Zweibel. As Hunt portrays him, Zweibel is a quick-witted mensch with low self-esteem desperate for more of a relationship than Gilda will offer.

Tom Fonss has the herculean task of rendering all of the secondary, instrumental individuals that Gilda and Zweibel interact with. Fonss brilliantly, sometimes at the drop of a hat, plays these distinct personalities with simply the addition of an accent, a switch of body language or a costume change. Fonss’ scene-stealing, fascinatingly fun-to-watch cast of characters include his legion of multi-ethnic Gilda fans, the infamous Andy Warhol, Gilda’s hot one-night stand, Zweibel’s anxious bride at the alter and many more.

Erin Pineda’s Gilda drives the play, as she should. Pineda is most effective when one can forget or is not completely familiar with the real Gilda. While Pineda gives her Gilda full three dimensions, my attention wavered between being in the scene and comparing the actress with the real Gilda.

In one of the play’s best scenes — that all but a star high school quarterback could deliciously enjoy — Zweibel sees a former schoolmate enter from a distance. Zweibel tells Gilda how this person tortured and humiliated him on a daily basis. When this bully greets his former victim, he resumes his digs and put-downs as if no time has passed. Then the school chum recognizes the now-famous SNL actress Gilda. As he’s fawning all over her, Gilda proceeds to lavish compliments and superlatives on Zweibel, touting his current gig as SNL writer and describing the many ways Zweibel excels as her extremely amazing lover. Gilda’s lap dance on and passionate kisses with Zweibel leave the tormenter totally impressed and one-upped by Zweibel. At the same time, Zweibel’s feelings for Gilda are explicitly awakened.

Set and video design by Adam Flemming successfully delineate the various locales. Dimitri Toscas directs this laugh-filled drama in a quick, steady pace to its inevitable tearjerking ending when Gilda loses her battle against ovarian cancer in 1989.

Go, and be prepared to shred a few tears amidst your laughter.