Review: ‘Eurydice’ at A Noise Within 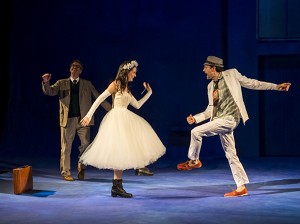 As in the original myth of Eurydice and Orpheus, there is much heartbreak in playwright Sarah Ruhl’s “Eurydice,” an intriguing rendering of the story onstage at A Noise Within through May 19. As it’s been told traditionally, this is Orpheus’ tale. Ruhl has decided to make it Eurydice’s journey we follow this time as she faces temptation, fear and the consequences of her decisions.

At play’s opening the two lovers are infectiously giddy with love, but Eurydice is soon lured into the underworld by the chance to read one last letter from her dead father. It’s a fatal decision, but perhaps one driven as much by insecurity as filial love. Music is everything to Orpheus, and he may love it more than he loves her.

Once in the underworld, Eurydice is protected and guided by her father. Though among the dead, he remembers who he is and the love he holds for his daughter. He sets about reminding her of the sweetness of the life they once shared. Meanwhile, Orpheus, who has searched the world over for his bride, decides to descend to the underworld to bring her back. He pleads his case and wins the right to return to the face of the earth with Eurydice.

The plum role of Eurydice’s father is played movingly by Geoff Elliott, who also directs. Jules Willcox is winning and charming as Eurydice. Ryan Vincent Anderson is indeed “nasty” as the man-child lord of the underworld. Graham Sibley, in the role of Orpheus, is the one false note in the production. His Orpheus is as lightweight as a member of a boy band and lacks intensity. More shaping by Elliott of Sibley’s character is needed.

This is a visually stunning production, thanks to scenic design by Jeanine A. Ringer, lighting design by Meghan Gray, projection design by Brian Gale and costume design by Angela Balogh Calin. Lighting and projection are nearly as active in the production as the characters. Sound design by Doug Newell is astonishingly evocative. Bravo for violinist and composer Endre Balogh, whose music complements and never overwhelms.