Review: ‘Fela!’ at the Ahmanson Theatre 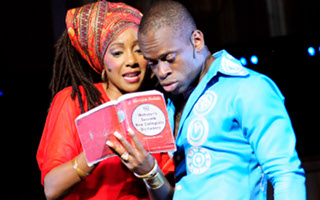 About three-quarters of the way in, the musical “Fela!” delivers the emotional impact of a bellyflop. It’s the all-too-familiar horror story heard around the world: Big guys take advantage of little ones. Woman raped, man beaten, man killed, woman harassed and intimidated. It could be Laos, Lagos or Los Angeles. The rich and powerful bully the poor, weak and politically dissident. In the case of “Fela!,” now playing through Jan. 22 at Center Theatre Group‘s Ahmanson Theatre, terror reigns down on Afrobreat legend and activist Fela Anikulapo-Kuti, played by Sahr Ngaujah (Adesola Osakalumi is his alternate), his followers and fans in his home of Lagos, Nigeria, for standing up to the powers-that-be for freedom from corruption.

Fela’s acts of protest on behalf of his country, and all of Africa, threatened the legitimacy of the region’s oppressive military rule. He was jailed more than 200 times, and his mother Funmilayo (Melanie Marshall), also an activist, died from injuries suffered after being thrown from a second-story window. Interwoven throughout the exuberant African dance numbers and provocative catalogue of Fela’s popular grooves is the story of Fela’s political struggle, which rears its head in today’s Occupy movement. Heart wrenching and inspiring, his uprising enlivens the audience with the spirit of social justice.

Ahmanson audiences are led to believe they are sitting inside The Shrine, a nightclub in Lagos, Nigeria, in the late ’70s. It’s Fela’s last performance, and as he runs through his favorite songs, he chats with the crowd, shares his life story and rants about political malfeasance. The audience, at times, is commanded to shout out, sing along, and get up and dance. “Leave your shy outside,” Ngaujah orders, and adds, “Find your own groove wherever you are.”

Fela was determined to find his own voice through music; he traveled to London, New York and Los Angeles collecting sparks of inspiration, yet always returning to Lagos. The Tony Award-winning musical takes us on a tour of select parts of Fela’s life. “Drum is the pulse of the world,” he states. In “B.I.D. (Breaking It Down),” he and his dancers demonstrate the music-body-emotion connection. Fela transports us to different parts of the world as he discovers and creates his Afrobeat sound. He explains that he set out to “marry high-life to cool to jazz,” when, in an epiphanic moment, he meets an American named Sandra (Paulette Ivory), who introduces him to Black Power Man. The American political movement would influence his life’s work in Lagos.

“Fela!” is brave in its implications of the bad guys, from IMF and WTO to Halliburton and AIG. The book by Jim Lewis and Bill T. Jones alludes to exploitation at the hands of huge multinational corporations, and also chronicles specific instances by the Nigerian government. Ngaujah, who steps into Fela’s shoes magnificently, is cutting and clever when he calls out companies/governments for “419,” the Nigerian penal code for fraud, and explains that the colonial powers took “petroleum, diamonds and people” from Nigeria and gave “gonorrhea and Jesus.” Fela was opposed to colonial rule, but also to that of his own corrupt government, and those like his all over Africa. “Colonial mentality is a hard thing to break,” Fela laments; in his eyes, the Nigerian government seems to have perpetuated some of the same crimes. Lewis and Jones are bold in underscoring the continuing corruption into our current times.

What makes “Fela!” even more genius is that the creative team — which includes co-conceiver Stephen Hendel and Aaron Johnson and Jordan McLean who wrote additional music (Carlos Moore wrote the authorized biography Fela: This Bitch of a Life on which the musical is based.) — surrounds this larger narrative with entrancing African dance sequences and concert performances that keep the audience spellbound. Colorfully costumed in what appears to be traditional African style, the dancers pull off the most sensual moves as if they were easy as pie. This is one of the ultimate gifts a dancer can give an audience: making the movements look simple while having fun. Playful, often with attitude, and brimming with erotic confidence, the dancers move together, and alone, to the rhythms of Djembe drummer Rasaan-Elijah “Talu” Green and the entire onstage band. Their hips shake, sometimes faster than imaginable, their backs arch and spring forward, their arms and legs stretch, their knees bend, booties pulsing to the beat. If Jones’ choreography anchors “Fela!” in magnificence, the singing pulls it to the heavens. Ngaujah breathes new life into Fela’s own music when he performs it.

“Fela!” asks thought-provoking, rabble-rousing questions. Is Fela, or people like him, a nationalist or terrorist? In the final scene, “B.Y.O.C. (Bring Your Own Coffin)” the ensemble follows Fela’s lead in placing his mother’s coffin on the steps of the capitol. They carry small, wooden coffins with words on each one, such as “Rodney King” and “Sudan.” The last two coffins read “doubt” and “fear.” As Ngaujah told me five days before Los Angeles’ opening night, “What we are offering with our story is the highlight of having the courage to face your fears. If people have that, you can see a lot of things improved.”

Fela declares “music is the weapon,” and, as is the case for many arts activists, it appears to be an extremely effective one.

“Fela!” continues through Jan. 22, 2012, at the Ahmanson Theatre at the Music Center. Tickets for are available by calling (213) 972-4400, online at www.CenterTheatreGroup.org or in person at the Center Theatre Group box office.