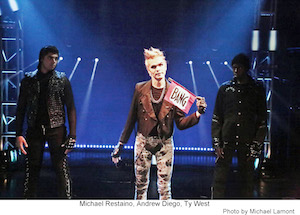 Any time you have a troupe of young people on stage singing their hearts out, you want to get behind them, cheer them on, share the passions they are feeling. In American Idiot, the musical built around the 2004 Green Day concept album of the same name, the nature of the production makes this more of a challenge than normal. In a drama that deals with youthful alienation, disaffection and ennui, the hurdle is high to find characters you can care about, especially when they are literally giving you the finger from the get-go.

In its favor, American Idiot, presented by DOMA Theatre Company at the MET Theatre through July 26, is neither dull, nor slow moving. Things zip along quickly, and there is always a lot to look at, with a dozen video screens, scads of era-relevant posters and graffiti and a cast of over 20 pumped up young actors. But more than anything, the music is what propels this production forward and therein lies its appeal. From hook-laden ballads to sneering power punk rockers, the songwriting and lyrical excellence of Green Day frontman Billie Joe Armstrong is always at the forefront. A live five-piece band, dressed in the punky black sartorial style of Green Day, plays all the songs from the original American Idiot (plus several others) at the back of the stage. Their musical performance is solid, although for a guitar-driven band, I would have liked the guitars to come a little more forward in the mix.

The main problem comes with the solo singing. Only a few of the many singers reveal moments where you can suspend disbelief and imagine you might be hearing an authentic rock performance. Most of the time, it is clear that you are hearing voices trained for musical theater, some more adept at it than others. While this has more or less always been the case with rock operas, and to be expected, I was still hoping — in vain — for a banishment of the faint falsetto, an exorcism of the emotive vibrato. It can happen: Billie Joe Armstrong actually joined the cast of the Broadway production for 50 performances in 2011, but don’t hold your breath for such a revelation here.

However wanting American Idiot may be for that one true voice, Musical Director Chris Raymond has given us something nearly as good — densely layered multi-part harmonies that are the basis of many of the songs, and it’s a good decision. The complex harmonies mask any individual inadequacies, and it becomes satisfying to hear the new arrangements with voice upon voice upon voice.

But you still need charismatic and magnetic leads to carry the dramatic action. Unfortunately, the main character, known as Johnny/Jesus of Suburbia (played by Jess Ford), just wasn’t very convincing, vocally or otherwise. He seemed more confused than rebellious, more Judas than Jesus. To be fair, this may be partly a structural problem with the concept. Johnny/Jesus is supposed to be a confused, rudderless character — and he’s not alone; his bong-smoking compatriots aptly personify the song Give Me Novocaine. It falls mainly to Johnny’s alter-ego, punk lord St. Jimmy (played with a quasi Billy Idol brashness by Andrew Diego), to shoulder the task of being charismatic.

The symbol of American Idiot is a fist holding a bleeding heart/hand grenade. It’s a good metaphor in that it ties together the themes of wounded souls searching for emotional connection/meaning, while lobbing bombs of contempt at the perceived stupidity and conformity of “straight” America. True to its period, there are images of Bush and Cheney mixed in with faceless suburban tract homes, images of war and fast food franchises. But the latter is just window dressing for the song and dance ensembles that tell the story of the rather pathetic characters. If you can overlook actually caring about these characters, you’ll have a great time fist-pumping along with the cast through hit after hit.