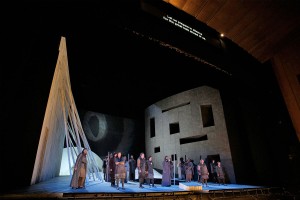 If you’ve ever sipped a chilled Bellini cocktail, you know that it is refreshing, bubbly and sweet, qualities that come to mind when listening to the music of Vincenzo Bellini, composer of Norma. Although the cocktail dreamed up at Venice’s Harry’s Bar was actually named after 15th-century local artist Giovanni Bellini (supposedly duplicating the pinkish color of a saint’s robe), the opera is no less a quaff of satisfying effervescence as those two other Italianismo classics.

Bellini the composer, popularly known as “the swan of Catania,” died tragically young: Norma premiered in 1831 when he was just 30, but he succumbed to an inflamed colon only three years later. He wrote a number of operas that are still performed with some regularity today such as La Sonnambula, Capuleti and I Puritani, although Norma stands out as a work that provides a magnificent edifice upon which a great soprano might stake her career. One of the most unforgettable interpreters of the lead role in the more recent past was Maria Callas.

And perhaps magic strikes once again with Angela Meade singing the lead in LA Opera’s production. Winner of the 2012 Beverly Sills Artist Award, Meade is known for her powerful, versatile soprano. I say perhaps because, regrettably, there was an announcement just before the curtain on Dec. 2 that Meade was “indisposed.” The rest of the announcement was obscured by the audience’s moans of disappointment, so it was not quite clear to those seated around me exactly who it was singing the role when Norma finally appeared. She was good — outstanding actually in the softer melodic sections — but never overwhelming with her vocal power or drama. Only later did I find out that it was Meade herself performing as Norma, but certainly holding back due to whatever health issues she was dealing with. The showstopper of the First Act, “Casta Diva,” was an aria Meade formed her reputation upon in 2007 in an audition that, according to The New York Times, “left everyone breathless,” but was this night just so-so.

Fortunately, there was a good deal else to appreciate in this production directed by Anne Bogart, from the fine sounding orchestra under James Conlon, to the dreamy totemic set design and the large, masterful chorus. Certain singers deserved notice as well. Jamie Barton sang Adalgisa, the Druid priestess, with a pleasing sense of melody, and Morris Robinson plumbed Stygian depths with his baritone. But I think it was obvious to all that the singing star of the night was Russell Thomas as Pollione, the Roman commander who was both Norma’s lover and betrayer. Thomas sang with such verve and authority that he completely took over the stage whenever he was on it. On any normal night, I expect Meade would match his brilliant presence, but on this night Thomas stood alone on the promontory of perfection.

This is a story that takes place in the first century B.C. in England at a time when the Romans have invaded the lands of the Druids. A color illustration of the set design for the original 1831 production of Norma shows a spectacularly ornamented architectural space that elevates the mysterious Druids to the same level of refinement and advanced culture as the Roman invaders.  Of course, we know today that these early Brits lived in stone and thatch huts, not ornamented villas; accordingly, the concepts of set design for modern Normas take a different tack. Set Designer Neil Patel has crafted a space that suggests more than specifies. Leaning poles suggest trees, a wall with cutouts suggests a building façade or maybe a cave. A large moon rises in the background. Are we in a wooded glade or a temple? We are encouraged to allow our imaginations to take hold and determine it.

In some ways, the solemnity of the Druid priests and priestesses and the invocation of pre-Christian Gods made me feel like I was watching a 17th-century Baroque opera. The giant all-seeing eye painted on the rear wall likewise seemed a nod to the spiritual symbolism that those operas so typically reference. But the aching, long melodic lines of Bellini always brought me back to the reality that I was listening to music representing the height of Romanticism and that this was a classic Bel Canto opera. Despite the tragedy of the denouement, I reached the end feeling untroubled and comfy, enveloped in a blurry haze of pleasure. Only one suggestion to LA Opera for improvement: at intermission, sell Bellinis in sippy cups to take back to your seats.