Review: ‘To Kill a Mockingbird’ at Will Geer’s Theatricum Botanicum 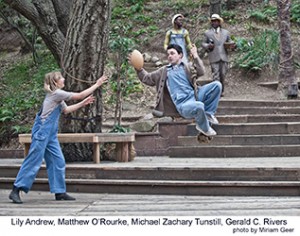 It’s been said that courage is the rarest virtue, which perhaps goes a long way in explaining the deep emotional resonance of To Kill a Mockingbird. Harper Lee’s 1960 novel combines a coming-of-age story with a courtroom drama all set in a mythical small Alabama town during the Great Depression. Its themes of racial injustice, class and gender (among others), make it more relevant than ever in today’s social climate. The theatrical version, playing at Will Geer’s Theatricum Botanicum in Topanga, is part of this summer’s Americana series.

I knew I was going to like this production (adapted by Christopher Sergel, directed by Ellen Geer) even before it began. While old-timey music plays, a woman in a Depression-era shift tends to flowers and plants alongside the stage followed by her tranquil dog, who then happily curls up in front of the house for the entire First Act. This is Maudie, a neighbor and the occasional narrator of the story. But the real play starts with a whirlwind as 8-year-old Scout and her older brother Jem come racing onto the stage, in all their youthful exuberance. We quickly get to know these two children as normal kids looking for ways to avoid boredom. To them, the most boring thing they can think of is their widower father Atticus Finch, whose profession as an attorney will soon lead him to defend a poor black neighbor against a charge of rape and in the process bring his children understanding of some hard truths about their neighbors and town.

To Kill a Mockingbird deftly weaves a Southern Gothic study of manners, customs and moral codes of the early 20th-century Deep South into a courtroom drama involving race and violent assault. The drama’s moral center revolves around Atticus, played by Richard Tyson. Having grown up in Mobile, Tyson’s grasp of Southern manners is spot on, and he imbues Atticus with the sense of self-effacing charm and gentle but firm resolve. During the courtroom segment in Act II, Atticus presents his case to the audience, effectively making us part of the jury who will determine the outcome of the wrongly accused Tom Robinson (Max Lawrence).

Of equal dramatic worth are the children of the play — Scout, Jem and the neighbor boy, Dill. Scout (Lily Andrew) is a feisty girl who doesn’t hesitate to fight for what she thinks is right. Her character arc from self-absorption to a defender of human rights is believable, and Andrew hits all the right notes along the way. Jem (Clint Blakely) adds a great physicality to his role as a boy just discovering what it means to be a man. And Dill (Cameron Rose), a gawky nerd with thick glasses, shows us flashes of youthful brilliance and eccentricity, reminding us that the character from the book is based upon Truman Capote, Harper Lee’s childhood friend. The remainder of the large cast of 35 or so actors all have something special to offer in terms of how they illuminate their characters. Thad Geer makes a terrifically gruesome villain in his racist character Bob Ewell.

Every time I go to Theatricum Botanicum, which is set outdoors in a leafy glade far up in Topanga Canyon, I tell myself I must get there more often. It truly is one of Los Angeles’ most compelling theater spaces. Characters drift into scenes from pathways that lead in from far off each side of the ravine, or from rocky outcroppings above. The nearly infinite height, depth and width of the physical space add a built-in feeling of expansiveness and immersion that enclosed theaters must work harder to establish.

It is a family affair at the Theatricum. Many of the actors are related, some by blood, others by having grown up in the area and acted in productions there since their earliest days. It is also a good place to bring your family and friends; with numerous picnic benches surrounding the theater, you can easily claim a spot, bring a picnic, and enjoy the cool shade with your food and drink. With a terrific production like To Kill a Mockingbird, it’s all the more reason to plan a trip up into these mountains soon.

To Kill a Mockingbird runs through Sept. 27 at Will Geer’s Theatricum Botanicum, 1419 N. Topanga Canyon Blvd., Topanga 90290 (midway between Pacific Coast Highway and the Ventura Freeway). Call (310) 455-3723, or visit www.theatricum.com.