Review: ‘A Carlin Home Companion’ at the Falcon Theatre 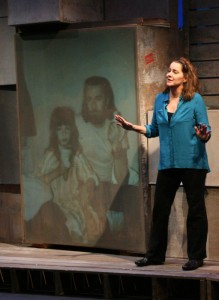 Kelly Carlin in "A Carlin Home Companion" at the Falcon Theatre. / Photo by Sherry Greczmiel

With “A Carlin Home Companion, Growing Up With George,” Kelly Carlin gives audiences a gift: an entertaining night of George Carlin’s comedy (presented through video clips) wrapped in an uplifting story of self-discovery. The triumphant one-woman show, directed by Paul Provenza, continues through March 1 at the intimate Falcon Theatre in Toluca Lake.

Kelly shares a lifetime of experiences with her irreverent and hilarious father and her mother Brenda (who was also in show biz). She refers to her family as “the three musketeers: all for one and one for all.” With all the drug use in the family, you might expect something tragic, but Kelly’s story is full of love. She loves her family, and they loved her. Even if the dysfunction left her somewhat lost for decades — focused more on taking care of her parents than herself and basking in the glow of her famous father rather than finding her own spotlight— there is no blame or pity party here.

Kelly struggled for years to find her voice. She found encouragement at UCLA, where she attended classes with her mom (she found it painful to go out on her own) and finally graduated with a degree in Communications Studies at the age of 30. It’s easy to connect with her struggles, and her voice is sunny despite some experiences that might have left scars.

George’s comedy was political and cultural; it was not personal. So Kelly tells us that her father never really understood her desire to write an autobiographical show, and to keep going back to it. But she stuck with it and found her way.

Some stories stayed with me after the show as a lump in my throat. For instance, two years after her mother’s death from cancer, Kelly found a tissue George used to wipe her eyes saved in a box of mementos. The emails Kelly exchanged with her father later in their lives — after they opened up and learned to really talk with each other — were also beautiful.

“A Carlin Home Companion” is entertaining and emotionally revealing, funny and uplifting. Kelly Carlin has definitely found her voice.