Review: ‘A Delicate Balance’ at the Odyssey 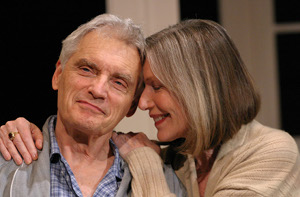 Edward Albee’s Pulitzer Prize- and Tony Award-winning “A Delicate Balance,” currently at the Odyssey, rivets with two engaging female performances. Albee has an impressive repertoire of providing his female characters with lots of opportunity to dominate the proceedings (“Who’s Afraid of Virginia Woolf?,” “The Goat, or Who is Sylvia?”). ABC’s “Castle’s” Susan Sullivan inhabits her character Agnes as comfortably as she wears her designer block-knit sweater.  Sullivan gets the best lines and runs with them. The play’s finest scenes ignite when she’s sparring with her daughter Julia, played with realistic intensity by firebrand Deborah Puette.

Empty-nesters Agnes and Tobias (David Selby), via circumstances not of their doing, suddenly have their home full of wanted and unwanted houseguests: Agnes’ alcoholic sister Claire (O-Lan Jones), their daughter Julia running back to mommy and daddy from her fourth failed marriage, and Tobias’ best friend of 40 years Harry (Mark Costello) and his wife Edna (Lily Knight).

Albee’s male characters tend to be on the weak side (“Virginia Woolf’s” George, “Goat’s” Martin). As directed by Robin Larsen, Selby effectively plays Tobias as a spineless, pathetic, ineffectual man adverse to any confrontation. The only time Tobias grows a pair, he defends his sister-in-law’s continuous drinking. Tobias’ third-act revelation of honesty stuns, but surprisingly not enough.

Jones adroitly hijacks the first act with her endless drunken rant, allowing no room to develop any sympathy for her comic relief character. Costello and Knight’s entrance later in this act brings a breath of energy and fresh air to the vitriol of the previous goings-on. Costello succeeds in exhibiting the good on the male side of these tangled relations.

The third-act resolve comes down to three options: invite best friend Harry and his wife to leave, kick out Claire and Julia, Agnes divorces Tobias (her suggestion). The play does resolve itself without any definite input from Tobias. I was rooting for the divorce.