Review: “A Heap of Livin’” at the Odyssey Theatre 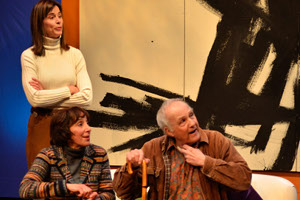 The world premiere of Elliott Shoenman’s “A Heap of Livin’” benefits from a splendid cast onstage and multiple award winners behind, but with several false endings in the two-hour production, some efficient editing could tighten up this sad tale.

Directed by Mark L. Taylor, “A Heap of Livin’” focuses on the contentious relationship between a not-at-all-healthy legendary folk singer Ramblin’ Harry Roe and his two middle-aged daughters, Eden and Pearl. Eden, the successful writer living in New York, sends money to Pearl to take care of their aging father in California. When a New York organization plans to honor Harry with a life achievement tribute, Pearl brings Harry to camp out in Eden’s co-op, secretly planning to dump him there.

The four actors seem perfectly cast for their individual roles, making it easy to forget the past roles each actor is known for.  Jayne Brook, so recognizable from “Chicago Hope,” is Eden, a once successful author with a huge grudge, justified or not, against her habitually absentee father. Didi Conn, unforgettable as Frenchy in the “Grease” films, is Eden’s sister Pearl, the not-as-successful, semi-manic bundle of exposed nerve endings who’s stuck neglecting her own family to care day and night for their more-than-semi-invalid father. The multi-TV-and-movie-credited Lawrence Pressman totally inhabits the crotchety, stubborn senior citizen Harry with glimpses of the vibrant performer Ramblin’ Harry Roe once was. Salli Saffiotti effectively makes her mark as Eden’s heart-broken neighbor Rachel, a 9-11 widow.