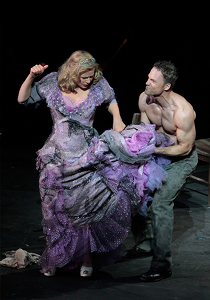 Who can forget the indelible image of a young Marlon Brando howling “STELLA” in Elia Kazan’s 1951 film “A Streetcar Named Desire”? It’s a delight to see the same scene reprised in the operatic version of the Tennessee Williams’ play currently at LA Opera. However, this “Streetcar” makes a few too many stops along Uninvolving Boulevard to recommend it as a mass vehicle for entertainment, even though the destination is ultimately rewarding.

In contrast to the lavish production of “Thaïs” currently running at LA Opera, “A Streetcar Named Desire” is as spare and austere as a summer camp in February. There are a couple of tables, several chairs, a hanging light and a trunk. The ’40s-era costumes are all drab, except for those of the aging but girlish protagonist Blanche DuBois. So there’s not much to look at, unless you can appreciate the surfeit of hunky muscle-shirted beefcake (Stanley Kowalski and his pals) roaming the stage for much of the play. Director Brad Dalton also puts them to use moving the props around scene by scene to suggest the two rooms where the action takes place.

The musical score by composer André Previn (conducted here by Evan Rogister) is another problem. Even though this opera was written in 1997, its discordant and contra-melodic musical ideas seem like a variation on mid-20th-century modernism. Accordingly, it comes as no surprise that Previn professes a love for Benjamin Britten operas. While the music connoisseur will be able to appreciate the complex harmonic voicings and skittery, jagged musical approach, it produces a very uneven ground for opera singers to navigate. You never can guess what odd note they are going to hit next, nor should you expect much of anything that resembles a “tune” in the normal sense.

One of the big draws for this “Streetcar” is soprano Renée Fleming, who plays Blanche. Now in her late 50s, Fleming played Blanche at the opera’s opening in San Francisco in 1998, and so this is a homecoming of sorts for her, and a role she knows well. She is a genuine opera superstar and still has the vocal chops as she ably demonstrates throughout the opera. Her arias at the end of Act II and beginning of Act III allow her to stretch her vocal chords a bit, and the crowd loved it. The other principals have vocal talent as well, especially Ryan McKinny as Stanley and Stacey Tappan as Stella.

What is most enjoyable about this production is the acting, for in the end, this is the sine qua non of the great work that Tennessee Williams left us. There are few operas I can think of that have as nuanced or complex character development. All of the principals, from the brutish Stanley to the deluded Blanche prove that they can hold their own when matched against past film or stage versions. This is where the emotional connection is strongest. Stella’s sexual satisfaction with Stanley is wordlessly spelled out, while Stanley fully inhabits his character as the low-class alpha male, brimming with passions he can barely control. And Blanche’s desperation to fend off decay and death is truly pathetic, in a good way.

In my opinion, the music and singing added by Previn, while interesting at times, add little that could be considered essential to the work. To the contrary, I found it to be distracting to the acting at times because of the mannered quality of the singing. However, things improve musically in the third act. The music becomes less abstract and improvisational and mirrors the action effectively. It is appropriately dramatic during Stanley’s assault on Blanche and becomes lovely and lyrical as Blanche descends into the soft, gauzy inner fantasy world that protects her ego.

With only three performances scheduled (two have already concluded), “Streetcar” is a staccato burst of flavor to spice up an opera season that is nearing its conclusion. I would not call it essential viewing, but if you are a Fleming fan or a Tennessee Williams devotee, or are curious to see whether opera singers can act, by all means, go take a ride on this “Streetcar.”