Review: ‘Abbamemnon’ at the Falcon Theatre 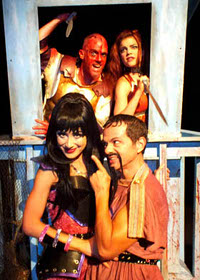 Abba aficionados (and theater lovers looking for some good laughs), run to see “Abbamemnon” currently at the Falcon Theatre! The Troubadour Theater Company, headed by Matt Walker, has taken classic Abba songs and inserted them, quite logically and very cleverly, into a re-imagining of the classic Greek tragedy “Agamemnon.”

The experience begins when you enter the theater with what appears to be statues of centurion soldiers onstage. Once they start moving, shattering the illusion, they hold up a sign that reads “Photo Op,” inviting audience members to snap pix with them. Many do.

Then the show begins, or so we are made to believe. The entire cast, decked out in costume designer Sharon McGunigle’s variations of Greek togas and uniforms, gather in front of the stage addressing the audience with the standard pre-show spiel. Only they sing it as a re-worded “Take a Chance on Me,” with the requisite emergency instructions, cell phones off and bathroom directions. A serious show this certainly will not be!

Walker directs this fast-paced 80 minutes, set in present day Malibu, with barely enough time to stop laughing before the next occasion for laughter, or groans. Walker winningly doubles as the title character Abbamemnon, King of Malibu, with a strong voice and commanding regal presence (especially evidenced in his “Money, Money, Money” number). Left to run Malibu in Abbamemnon’s absence to conquer Troy, Queen Clytemnestra (hysterically limned by Monica Schneider as an entitled ’Bu (as in “Malibu”) queen bee socialite) strikes up a coital dalliance with Abbamemnon’s cousin Aegisthus (deliciously, mustache-twirlingly played by Rick Batalla). Schneider gets to exhibit her impressive vocal chops in all her tunes, especially “Malibu, er, Waterloo,” while Batalla scores with his growling “Watch Out” solo.

Other integral performers in causing the many, many chortles and guffaws include: Beth Kennedy as the Watchman/ narrator of this piece; Joseph Keane as the spear-impaled Herald returning from battle; Katherine Donahoe as the future-seeing, captured Trojan princess Cassandra; and Rob Nagle as the always-skeptical Thyestes. Also affecting smiles throughout: Jen De Minco, Tyler King, Suzanne Jolie Narbonne, Darrin Revitz, Mike Sulprizio, Patrick Toth and Jason Turner. Molly Alvarez’s choreography received fun execution by all, especially in the witty “I’m a Marionette.”

“Abbamemnon,” augmented by a five-piece band, ably led by Eric Heinly, does Abba music proud, while accented with humorous shadow puppetry and oversized puppet heads by Matt Scott. Among the other Abba songs skewered are: “Dancing Queen,” “Voulez Vous,””Cassandra,” “Mamma Mia,” “SOS,” “Winner Takes It All,” “I Have a Dream.”