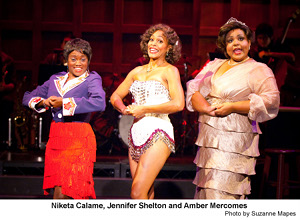 Most people have heard of Thomas “Fats” Waller, the famous pianist. Fewer folks realize he was a comedian. You don’t have to search high and low for his humorous side. Listen to his songs (or look at his face), with titles like, “Your Feet’s Too Big,” “The Reefer Song” and “Fat and Greasy.” These gigglers and a string of Fats Waller hits make up the playlist for “Ain’t Misbehavin’,” which opened Oct. 12 as the final show of the 2012 season at International City Theatre in Long Beach and runs until Nov. 4.

Fats Waller was a national treasure. Legend has it that he was kidnapped in 1926 on his way out of a Chicago performance. When he was released inside the Hawthorne Inn, he realized he was the surprise guest at Al Capone’s birthday party. They sat him down at the piano, and he didn’t get up for three days. Obviously, he was known as the life of the party. “Ain’t Misbehavin’” honors Waller’s catalogue by letting the good times roll right off his fingertips.

I can’t help but chuckle when leading ladies Jennifer Shelton and Amber Mercomes deliver a Sugar Daddy ditty called “Find Out What They Like.” The well-dressed duet shares its hard-earned secret for keeping a man: “Find out what they like and how they like it, and let them have it just that way. Find out what they want and when they want it without a single word to say.”

The pre-feminism lyrics strike me as silly (but still true). But it’s Waller’s knack for poking fun at people that takes center stage in each rhythm. Shelton and Mercomes strut around each other boasting about their jewels, fancy dresses and ability to please their men, while taking verbal jabs at each other through competitive sneers. This is just one of 30 songs, the bulk of which tackle varying degrees of love, delivered throughout the night inside a swingin’ jazz club during the Harlem Renaissance. Once the cast steps on stage, the piano man never stops.

Familiar tunes, like “Ain’t Misbehavin’,” “Honeysuckle Rose” and “The Joint is Jumpin’,” are the most fun. Of the cast of five, Shelton seems the most comfortable in her skin and on stage. The slim-figured sweetie melts hearts with “Mean to Me.” But overall, it’s hard to beat Nell Carter, who debuted her role in 1978 at the Manhattan Theatre Club. Carter was an alto; Shelton is a lyric soprano. Mercomes also has a background in opera. The double dose of high pitch adds a touch of class to the jumpin’ joint. Things just don’t seem as down and dirty as they should.

Phillip Brandon does fit the up-to-no-good bill. His character is at his best oozing insincerity; he seems right at home in the fast and loose all-night spot. His facial expressions scream everything his lips don’t dare to say. He’s good at the love stuff, like “Honeysuckle Rose,” but even better when he alternates flirting seductively with each of the three ladies.

“Ain’t Misbehavin’” celebrates the music of Fats Waller and the creative outpouring of the Harlem Renaissance. Waller’s hits are remarkable and timeless, and any remake has the difficult task of matching their caliber. This production as a whole seems stuck: It’s not as naughty as the 1978 original, and it doesn’t add anything exceptional in 2012.