Review: ‘Ajax in Iraq’ from Not Man Apart Theater in Hollywood 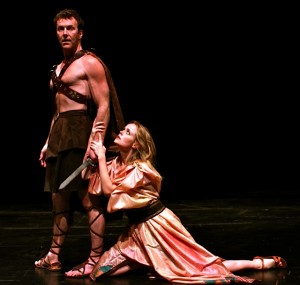 As I was entering the theater to see Ajax in Iraq, the latest production by the Not Man Apart Theater, the usher asked if I would like to be seated in the regular section or the “full-immersion” section. Naturally, I chose the full-immersion section, which turned out to be a group of seats directly on the stage, on the side. Curiously, I was the only one who made this choice, and while the unusual position does offer added impact and a unique perspective, the theater is small enough that any seat will be sufficient to absorb the power in this play. The play continues through Aug. 14 at Greenway Court Theatre in Hollywood.

The title of the play refers to Sophocles’ ancient play, Ajax, and actually interweaves that drama with another story of modern-day U.S. soldiers in combat in Iraq. Playwright Ellen McLaughlin has crafted a modern drama that has obvious parallels to the ancient tale, but diverges in a number of ways. The themes and the issues the characters face differ, but the result winds up the same. Ancient Greeks — Ajax, the Goddess Athena and others — often appear onstage together with the soldiers, although neither group is ever aware of each other.

It is an ambitious idea, to combine two worlds thousands of years apart, with circumstances that are only loosely correlated, and it does make for some confusing moments, when flipping back and forth between past and present, especially if you are unfamiliar with the Ajax story. Scholars have long disagreed on how best to interpret the Sophocles play, and this play does not clarify that issue, but it does raise questions about our adventure in Iraq and the psychological damage it has inflicted on our military personnel.

Ajax and his modern-day analog A.J. are the meat and potatoes of this play, and Director John Farmanesh-Bocca wisely plays to their strengths, preferring to exploit brute force intensity in place of nuance or thoughtfulness. While Courtney Munch is effective as the female soldier who goes off the reservation both physically and psychologically, it is Aaron Hendry as Ajax that bowls you over with his blind rage, his naked aggression and his thirst for revenge. Spittle flies, feet stomp and blades flash as Hendry, co-artistic director of the NMA, foments against his foes, both imagined and real. It is a raw performance that is especially gripping from just a few feet away. Other standouts were Joanna Rose Bateman as Athena and James Bane as Sergeant.

While the playwright and director explore modern maladies such as PTSD and sexual abuse of women in the military, it is the Sophoclean story that creates depth and resonance using age-old themes illuminating the madness and futility of war. When modern references become too literal — such as the bashing of President Bush for his role in enjoining the war — the enshrouding fog of feckless fury dissipates and we are left with what sounds more like a dreary polemical.

As is usual in NMA productions, there is occasional choreography applied to the proceedings that enlivens the play. This one begins with the ensemble leaping, rolling and swaying in shifting patterns that evoke military formations — quite clever, although it is less integral to the story than the choreography of the battle scenes.

Ajax in Iraq manages to take on hot-button issues like sexual abuse and suicide without lecturing us, preferring to communicate via action, metaphor and archetype. With this thoughtful approach, and with strong performances from its two leads, it is one of this summer’s compelling pieces of theater.

Ajax in Iraq continues through Aug. 14, with performances on Fridays and Saturdays at 8 p.m. and Sundays at 7 p.m. The Greenway Court Theatre is located at 544 N. Fairfax Ave., LA 90036. Free parking in the lot adjacent to the theater. For reservations and information, visit http://www.greenwaycourttheatre.org/ajaxiniraq/ or call (323) 673-0544.