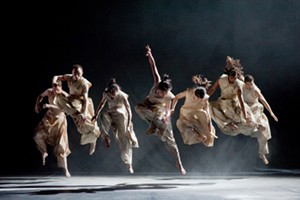 It is not common knowledge that Akram Khan was snubbed by NBC this summer during the American telecast of the opening ceremony of the Olympic Games in London. NBC replaced Khan’s five-minute dance sequence to the hymn “Abide With Me,” sung by Emile Sandé, with Ryan Seacrest interviewing swimmer Michael Phelps. Danny Boyle had it right though, in tapping Khan to present his work for the nearly 27 million U.S. television viewers. On Oct. 5, as part of Center for the Art of Performance (CAP) at UCLA’s dance series, Los Angeles was privy to witness Khan’s work up-close. The British Bangladeshi artistic director of Akram Khan Company debuted the West Coast premiere of “Vertical Road” (2010) at Royce Hall, with a repeat performance on Saturday evening.

Not as close, however, as audience members would have been at a show during UCLA’s previous seasons. Before the performance, CAP Executive and Artistic Director Kristy Edmunds explained how a few rows of seats in the front of the house had been removed in order to present each artist’s work as they had intended. In other words, people were just too close before.

“Vertical Road,” at 70 minutes sans intermission, picks up in intensity and never lets go. The stage is sparse: a sheet that reaches from floor to ceiling, seven small tablets standing in line at the corner of the stage and sporadic clouds of dust from white powder exploding into the air when hands meet bodies. The costumes are white and monk-like. All of these elements (including ethereal lighting by Jesper Kongshaug) work together to exude a spiritual, even religious, atmosphere: mysterious, anticipatory, searching.

These are difficult themes to express in movement. But the Akram Khan dancers — the large, imposing Rudi Cole is one of two to join the company this year — are magnificent, as they tumble, jump, lash, and pulse their bodies. One moment, they are arching their backs in unison and rolling upright, reaching their arms desperately to the sky, and another, in the show’s final moments, Egyptian Salah El Brogy stands with his back to the audience and arches over backward, his face hanging upside-down, eyes peering straight ahead, holding his own weight without quivering for what seems like eternity.

Every arm flail and punch and foot kick and stomp holds meaning. Some of the male-female duets hint at violence toward women. But the ladies — Pauline De Laet, Yen-Ching Lin, and Sade Alleyne — are hardy. They know how to take a fall and throw their weight around. The duos also work because the men appear controlled in their aggression. El Brogy, Cole, Andrej Petrovic, Elias Lazaridis, and Sung Hoon Kim are masters of their own bodies. Their delivery seems more aggressive than any intent, sort of like gentle giants.

Costume designer Kimie Nakano offers a treasure in dancer De Laet’s wrap. When Belgium-born De Laet, the second to join the company this year, is first introduced as a soloist, her partner grabs her back and tosses her around, revealing two handles hanging from the cloth. Like a Raggedy Ann doll, she flips, flops, and the two dancers execute holds and balancing tricks seemingly only possible because of the utility of the fabric.

Khan pulls inspiration from the Sufi tradition and a particular poem from the Persian poet Rumi. His choreography is rooted in classical Indian kathak and modern forms. “Vertical Road” reaches beyond all borders, insisting to be universal. Khan tells us in the program that our world is moving so fast these days he is “somehow inclined to move against this current, in search of what it might mean to be connected not just spiritually, but also vertically.”

Khan’s road is slow, often oppressive, but at the end, the audience walks away feeling they have wrestled something deep. We are all in the same divine predicament.