Review: ‘All Is Fair’ at the Dorie Theatre at The Complex 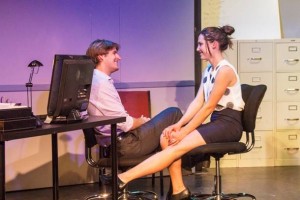 For those unaware, there has been something of a dustup over the past year or so concerning small theaters (“99-seat theaters”) in Los Angeles. At issue is whether the small theaters should be forced to pay minimum wage to actors using that space. The actors’ union, Actors’ Equity, is attempting to force the issue, while theater operators and many actors are opposed, claiming the higher prices will destroy local theater. I’m in the latter camp, and I should think that the folks behind the new play All Is Fair would agree, because this is the kind of work — from an emerging playwright that is still testing his mettle — that most benefits from the current system.

All Is Fair, currently onstage at the Dorie Theatre at The Complex, is billed as a romantic comedy, although the comedic part takes a back seat to meditations on love, sex and commitment. The story focuses on the budding office romance between two 20-somethings who are clearly attracted to each other, but hesitate to act for separate reasons. Dan (Reed Arnold) has an idea that he should be playing the field, rather than endanger his career with an illicit office romance. Heather (Sarah Elizabeth Johnston) is newly engaged and loves her fiancée, but realizes that he does not excite her the way Dan does. A boss, Vince (Ross Gallo), and Dan’s roommate, Chris (Michael Minto), fill out the rest of the cast and provide perspective for the lovers-to-be. The dialogue is fairly realistic and the acting is generally good too, with the most entertaining bits given to the roommate.

While ostensibly a fully realized, full-length play, All Is Fair nevertheless has a bit of a workshop feel to it. Perhaps part of it is that it is written and directed by the same fellow who is the lead actor: Reed Arnold. This “auteur” arrangement is one in which the strengths and flaws of a work can often be magnified. The audience can benefit from a clear, unsullied vision of the artist’s intentions, but also runs the risk of seeing a work that has had little in the way of vetting, critiquing or adjustment by other experts. There is actually a type of professional that performs these services for playwrights: he/she is called a dramaturge. These days, the role of a dramaturge has expanded from interpreting the intentions of historical playwrights to facilitating the creative process for new playwrights, conducting research, providing feedback and becoming a sounding board for ideas.

I don’t know whether Arnold used a dramaturge or not for this play, but no one seems to have noticed that this play is long — over 2 ½ hours long. Once we understand the crux of the problem facing the flirty office mates halfway through the first act, the basic conundrum seems to be rehashed again and again. I get that we are exploring the nuances of an ill-defined relationship and that the confusion and uncertainty about the possible outcome provoke still more discussion, but there is a point at which a clever plot twist or turning point can be invaluable in moving the story forward. But that moment never comes.

Author/Director/Actor Arnold has obviously spent a lot of time putting this play together and, really, who can complain about eavesdropping on the love lives of attractive young people? As long as the dialogue is competent, and the acting isn’t wooden, it’s an entertaining way to spend a few hours. I can only encourage Arnold to continue to hone his stagecraft (he has a couple of other performed works under his belt already) in these small theaters where he can try things out, see what succeeds and what fails. Then one day, perhaps he’ll be opening his latest production in a 999-seat theater complete with tails, tiaras and Ticketmaster.

“All Is Fair” continues through April 24 at the Dorie Theatre at The Complex, 6476 Santa Monica Blvd., LA 90038. Show times are Thursday through Saturday at 8 p.m. and Sunday at 7 p.m. General admission tickets are $20 at the door (cash only), $14 online in advance and “pay what you will” on Thursdays. For tickets: allisfairplay.com/tickets. For more information: (323) 465-0383 or http://www.complexhollywood.com/space_dorie_theatre.php.