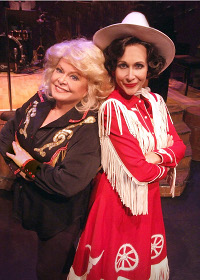 The role of Louise Seger, single mother and rabid Patsy Cline fan, seems as tailor-made for Struthers as the tiiiight jeans Struthers mimes putting on. Struthers is in her comedic prime with her deft physical comedy, comically timed tics and expressions, and hysterical sound effects. Struthers performs a delightful bump-and-grind in the guise of miming driving her convertible. When Struthers takes the stage, she grabs onto it for dear life, taking the audience right along with her. She frequently breaks the fourth wall, chatting with or responding to the audience. Struthers even chose a lucky gent and guided him onstage to dance with her (as Sally? or as Louise?). Doesn’t matter because it works either way!

Calvert’s Patsy Cline impersonation is marvelous. Calvert has Cline’s essence, her incredible contralto voice and her musical stylings down pat. Calvert even nails the tricky a capella beginning to the lullaby “If I Could See the World (Through the Eyes of a Child).” And then the band joins in. Very nice! Musical director John Randall (on piano) ably leads the Bodacious Bobcats Band, with Vince Tividad on bass, John McDuffie on guitars, Roger Cohen on drums and Mark Indictor on fiddle.

Ted Swindley’s script and original direction clearly focus on Louise’s interpretation of her life-changing meeting with her idol Patsy Cline. It is a missed opportunity not to delve into the off-stage persona of Cline, as she never seems to step off the pedestal Louise places her so delicately on.

Expect to experience more than 20 songs originally sung by Cline, including her hits “Walking After Midnight,” “I Fall to Pieces,” “Crazy” and “Sweet Dreams.” If you close your eyes, you’ll relive Cline’s original recordings, only without the needle’s scratchiness. Very nice indeed!