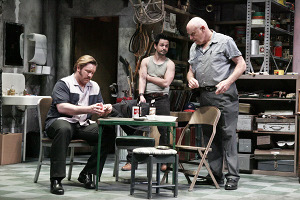 The title refers to a collectible buffalo nickel that catalyzes the main action of this timeless piece that opened on Broadway in 1977.  If it weren’t for the use of a rotary-dial corded phone, this play could very well take place in 2013.

Entering the Geffen main stage, one can’t help but be awestruck by the vivid details of Takeshi Kata’s intricate junk shop set with food wrappings on the floors, bicycle wheels and barrels hanging from the ceilings, and crammed steel racks full of tchotchkes and rusty discards in between. Once the action starts, you’re subtly made aware that the junkshop is below street level and it’s raining outside. Nice!

Bill Smitrovich persuasively evokes the sensibility and compassion of Don, the junkshop owner — well, he’s as sensible and compassionate as someone can be who’s planning a heist, albeit, a weapon-less heist.

As one of Don’s partners-in-crime, Ron Eldard infuses his highly volatile character Teach with much sympathy and pathos in the first act. Then quite believably transforms him into a total manic, desperate a**hole in the second act. Eldard absolutely dominates the first act!

The much more quiet voice of reason, Smitrovich shrewdly underplays the yin to Eldard’s yang, the right brain to the left, the heart to the impulse.

As the third wheel of the aforementioned heist, or possibly the abandoned wheel, slow-witted Bob may or may not hold the key to the plan’s success. Freddy Rodriguez ever so convincingly plays Bob as a cipher. Is Bob really as dumb as he acts? Or is he cunningly playing the other two guys?

Arney directs the machine-gun-delivered dialogue with a strong fist. Ned Mochel, “the violence designer,” deserves credit for the brief, but very surprising bits of physicality.

Those expecting intense Mamet characters with lots of Mamet conflict will not be disappointed. Those preferring to leave this two-and-a-quarter-hour drama with more resolutions than unanswered questions might be let down — a bit.