There are some interesting facts about the works on this concert. Everyone knows that Haydn was one of Mozart’s teachers, but he lived long enough to be influenced himself by Mozart. Aside from the fact that Manze chose symphonies by both composers in the key of D major and concerti in the key of E-flat major, it is interesting to note that the Haydn pieces were composed after the works by the much younger Mozart. 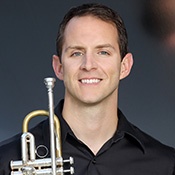 LA Phil Principal Trumpet Thomas Hooten and Principal Horn Andrew Bain played their respective concertos superbly. Hooten seemed a little uncomfortable moving from the very back of the orchestra to the spotlight, as well as accepting the audience’s standing ovation, but his playing showed nothing of that discomfort; it was confident, clear and sonorous. Bain’s sound was rich and full, and he navigated the sometimes-difficult passagework smoothly. Both performers showed why they are the principals of a great orchestra.

From the opening D major chord of the first movement of the Mozart Symphony, marked Allegro con spirito, to the closing D major chord of the last movement of the Haydn symphony, also marked Allegro con spirito, Manze brought out the best in the small LA Phil orchestra. Manze’s energy was transmitted to the players, and his long waving arms sometimes seemed to almost reach into the orchestra to pull out the music. Frequently smiling, he communicated with the players, sometimes personally, with facial expressions to let them know how pleased he was with their playing. 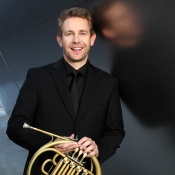 Manze took two 18th-century symphonies by the two great symphonists of the time (even though by the time Haydn died, Beethoven had written six symphonies) and made them sound almost Romantic. One could have guessed that Manze himself is a violinist the way he frequently cued the second violins to bring out their parts. The orchestra was like a fine German automobile in the way the musicians responded to him: sensitively and immediately. These were passionate and joyous performances, and, at the conclusion of the concert, with a still-cheering audience for his last curtain call, in the ultimate sign of respect, the orchestra refused to stand on Manze’s command and instead applauded him.