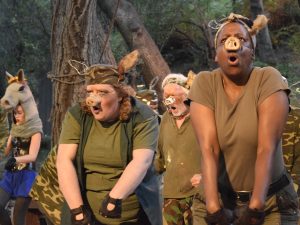 The arrival of warmer weather coincides with the opening of another season at the Theatricum Botanicum, the verdant outdoor theater nestled near the top of Topanga Canyon. One of the highlights of this season is an adaptation of George Orwell’s classic Animal Farm, onstage through Oct. 1 The 1945 novella, an allegory reflecting the events leading up to the 1917 Russian Revolution and the subsequent Stalinist era, has long been a staple in American schools and a vivid warning against totalitarian rule and authoritarian regimes in general. Theatricum’s production, leavened with songs, fanciful costumes and physical humor takes some of the sting out of Orwell’s message, but remains an entertaining production nonetheless.

The play opens with two children reading the narrative backstory about the farm owned by the brutish farmer Mr. Jones. We know right away that this is not going to be an exercise in nuance as Mr. Jones storms across the stage in a drunken furor, whipping the farm animals and generally abusing and intimidating his charges. Incidentally, this character was Orwell’s version of Czar Nicholas II who, along with his family, came to an unfortunate end not long after the Revolution. As the animals begin to talk amongst themselves about a better world where “everyone is equal,” we begin to get to know the animal characters and their — ahem — pecking order in the farm hierarchy.

As the animals organize, a large scroll of seven principles is unveiled that reminds one and all what they are fighting for — dictums such as “two legs good, four legs bad,” or “no animal shall sleep in a bed.” As time goes on and the farm is subject to ever more dictatorial ways from the head pig Napoleon and his hench-creatures, the principles are crossed out one by one leaving, in the end, the final principle stating that all animals are equal (but some animals are more equal than others).

Orwell was not terribly opaque about the parallels he was drawing: the farm-dwellers came up with a name for their movement — animalism (communism) — and the shortage of food they experience due to central mismanagement recalls the horrific government-induced famine of the late 1930s in Soviet Russia. But Americans today know little about this history as it fades further into the mists of time (if they ever knew much of the truth at all). The book’s message about the dangers of collectivism is typically glossed over, and it tends to be seen today merely as a warning against any type of authoritarian behavior. Accordingly, it is not surprising to note that Director Ellen Geer has slipped in a reference to Trump in a line about “alternative facts” (nudge nudge, wink wink) that got a chuckle from the audience. Sure, she’s playing to the local audience, but it’s a cheap shot considering the brutal reality that Orwell had in mind, detailed in such a chilling way in Alexander Solzhenitsyn’s memoir The Gulag Archipelago.

Theatricum’s production has a large cast, most of whom are transformed into various farm animals. The physical affectations the actors applied to each type of animal were for me the most effective and entertaining part of the show. The sheep scurried about on crutches, acting and speaking appropriately sheepish; the three hens personified their birdlike natures with aplomb; and even Benjamin the donkey infuses his role with a stolidity and stubbornness befitting his breed. But this is an ensemble effort and no one character really stands out — not even the leader Napoleon nor his Trotsky-like nemesis Snowball.

Interestingly, this adaptation by Peter Hall, which includes music by Richard Peaslee and lyrics by Adrian Mitchell, was first mounted at the National Theater in London in 1984, the date that is eponymous with Orwell’s other dystopian classic. For this production, four musicians switch off on piano, woodwinds, guitar, banjo, melodic and percussion and some even do double duty as actors. The amiable tunes do add a degree of whimsy and lightheartedness that is sometimes at odds with the message, but overall it’s a net positive to the play.

Little has been done to the basic existing set at the Theatricum (other than hang a sign that says Animal Farm from a couple of posts), which is fine since it a flexible and useful arrangement. One of the things I like best about the Theatricum is how the actors and set designers use the space of the surrounding forest to create a super-deep, almost unlimited frame for the action, and this production is no exception. Characters often enter from and exit to the far distance, as if having trudged through the forest for hours to get there. The windmill is erected off a distance, giving the impression of the spaciousness of a real farm.

Animal Farm never gets old—it is such a simple and powerful way to tell a complex story. While many might assume that the harsh, authoritarian world conjured by Orwell’s books is the greatest danger we have to guard against, the truth of our current condition is perhaps better described by another allegorical book: Brave New World by Aldous Huxley. In Huxley’s dystopia, there would be no reason to ban books because no one will be interested in reading them; the populace instead being consumed with sex, narcotics and an infinite appetite for distractions. Whichever version turns out to be truer, the seers and sages that sketch out our potential futures bear repeated auditions, so cheers to the Theatricum for keeping it current.