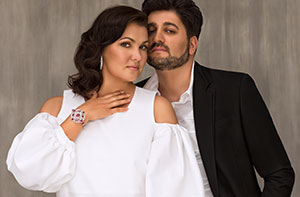 Soprano Anna Netrebko made a rare visit to Los Angeles with her tenor husband Yusif Eyvazov for a May 4 concert of opera highlights at the Dorothy Chandler Pavilion, with the LA Opera Orchestra guest conducted by Jader Bignamini.

Having a Russian opera superstar on the stage attracted a sizable attendance from the Russian community in Southern California. The opera audience in general tends to be a boisterous and passionate bunch. The intensity with which opera fans applaud great performances can motivate an army to invade a country; the viscous boos from opera fans given to unsatisfactory performances can in equal measure bring down an army. With a house packed full of Russians, that level of passion increased a few notches, as the applause became rowdier and some members of the audience shouted out music requests in Russian between applauses.

In making the opera selections for this evening’s program, the artists seemed to have made a clever attempt at crafting an overarching narrative out of the various selections from operas by Giuseppe Verdi, Francesco Cilea and Umberto Giordano. The program began with the determined and unrelenting call of fate by the trombones in Verdi’s Overture to La Forza del Destino (The Force of Destiny). Selecting this overture from amongst many of Verdi’s other popular overtures was most appropriate, as fate plays a strong-fisted role in determining the destiny and demise of all the characters in the opera selections tonight.

A good love story often begins with the introduction of two innocent, star-crossed lovers professing love for each other. In tonight’s program, Netrebko and Eyvazov opened with the love duet, “Già nella notte densa,” which concludes the first act of Othello. Just as the trombones set the brooding mood with the frightful call of fate in the La Forza del Destino Overture, Othello’s opening declaration of love hints at the violent rage brewing inside him. His words at first sound like a passionate declaration of love for Desdemona, but underneath the surface, there are hints suggesting that although Othello may have achieved success in the battlefield, he has yet to conquer the rage and jealousy within him.

If Othello was the vehicle with which to introduce tonight’s protagonists, then Verdi’s Lady Macbeth provided the antagonists. Whatever impressions of an innocent and faithful, but naïve, Desdemona Netrebko presented to the audience gave way to a cold, viciously ambitious and bloodthirsty Lady Macbeth in the aria “Vieni t’affretta!… Or tutti sorgete,” in which Lady Macbeth, excited by the witches’ prophecy of her husband Macbeth acquiring the throne, urges her nervous husband to have courage to murder his competing successors to the throne, so that they may realize what is due to them.

When lovers are tested, they reassure each other of their love for each other. Eyvazov did just that with much passion in his performance of “Ah, si ben mio” (Oh, my love, I’ll be yours) from Il Travatore, in which Manrico comforts Leonora, as they prepare to wed in the midst of a battle that threatens to pull them apart. When Manrico prepares for battle, he sings the famous aria “Di quella pira,” which is notable for the athletic ability required to reach the high C at the end. Eyvazov in approaching that difficult high C seemed to take an extended pause for a big breath before attempting that note, just as a gymnast would pause before sprinting down the runway and catapulting on a vault. But in the aftermath of victoriously hitting the high C, he gave a relieved smile.

The first half of the concert ended with the grand love duet, “Teco io sto” from Un Ballo in Maschera, in which Riccardo admits his love for Amelia. She reminds him that her husband is Riccardo’s most loyal friend, Anckarström. Eventually, she gives in and accepts his affection.

The audience may have left their seats for champagne during intermission, thinking all is well with the world, and feeling confident that fate has secured the desires of the lovers. But the scene that opens Un Ballo in Maschera — although not performed tonight — is one in which the fortuneteller tells Riccardo that he will be killed by the first man that shakes his hand, which happened to be his loyal friend and Amelia’s husband, Anckarström.

As if to ease the audience returning from intermission, before the tragic fate that is to befall the happy lovers, the second half opened with some Viennese charm and good cheer in the form of “Tu che m’ahi preso il cuor” from Franz Lehár’s The Land of Smiles.

The smiles were short-lived when Netrebko, as Adriana, sang “Poveri fiori” from Cilea’s Adriana Lecouvreur, in which Adriana receives the faded bouquet of violets she gave to Maurizio, the man whose affection she sought. She believes the return of the flowers to mean that he is not returning his affection. This aria comes just before the ending in which Maurizio rushes to tell Adriana that he loves her. But it is too late. The violets that Adriana kissed were tainted with poison by the scorned ex-lover of Maurizio, and Adriana subsequently dies in Maurizio’s arms.

In “Ebben! Ne andrò lontana” from La Wally by Catalani, Netrebko sang as Wally, who refuses to obey her father’s wishes to marry Gellner, as she is in love with Hagenbach — the enemy of her father. Wally and Hagenbach eventually unite in love in the final act of the opera. But the opera ends with an avalanche killing them both and their short-lived love.

Perhaps the concert organizers recognized the need for some reprieve from the demise that befell the lovers. So Eyvazov offered “Un di all’azzurro spzio” from Giordano’s Andrea Chénier, in which Chénier the poet improvises a poem about love.

But if fate began the evening with its calls through the trombones in the La Forza del Destino Overture, then it was for fate to have the final say for the evening through the love duet “Vicino a te,” also from Andrea Chénier, in which Maddalena, the daughter of an aristocrat, willingly gives up her freedom to die with Chénier, the idealistic poet, member of the French revolutionary and her lover. As Netrebko and Eyvazov held hands and faced the guillotine that awaited them, they sang, “Let us to death, united. Raise our song!”

Netrebko throughout the evening demonstrated her well-deserved status as a superstar. Her vulnerable Desdemona moved not just Othello to fall in love with her, but the entire audience as well. Her hissing portrayal of the murderous Lady Macbeth brought fear to both her husband and the audience. Her flirty, charming and sweet performance in the “O mio babbino caro” encore wiped away tears and restored smiles in the audience.

Eyvazov was a perfectly talented and capable partner, but his one-dimensional portrayals of all of the operatic characters made his performance more predictable and less interesting from an artistic perspective. His presentation of a jealous, enraged Othello came across the same as the idealistic poet Chénier and Calaf in the “Nessun Dorma” encore.

Netrebko brought stardom and glamour to Los Angeles’ opera scene, befitting the home of Hollywood. This reviewer is hopeful that she will soon come back for a performance at Disney Hall, so that LA’s opera fans can fully appreciate her voice in the more radiant and intimate acoustics.