Review: Antaeus Company Presents You Can’t Take It With You 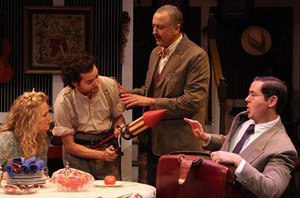 Eve Gordon, Jeremy Guskin, Marcelo Tubert and Jeremy Shouldis in "You Can't Take It With You" / Photo by Geoffrey Wade

High praise is due to the Antaeus Company, L.A.’s award-winning classical theater company, for getting some Kaufman & Hart material in front of modern audiences. George S. Kaufman had many talents, including playwright, drama critic, director and theater owner, although he is perhaps best remembered as wizard of the wisecrack.  With a quick and caustic wit, Kaufman was called upon to help craft slapstick one-liners for the likes of Groucho Marks, who once referred to Kaufman as “his God.” But it was his collaboration with playwright Moss Hart that produced a string of some of Broadway’s most enduring comedies, including You Can’t Take It With You.

The play, which debuted on Broadway in 1937, is set in the living room of a 1930s Brooklyn house and centers around a newly engaged pair of young lovers. The comic premise involves the first meeting of two disparate families: the stuffy over-starched parents of the junior executive Tony and the wacky and eccentric family of the young ingénue Alice.

This production is double cast, and I saw the Sycamores cast perform. The first scene establishes the zaniness of Alice’s family. The mother (played by Eve Gordon) writes humorous plays and paints, while her other daughter (Kellie Matteson) offers a delightful turn of physical comedy as an aspiring ballet dancer who constantly prances about in exaggerated movements. The father (Paul Eiding) makes fireworks in the basement, while his Italian sidekick (Jeremy Guskin) doubles as a loincloth-clad model emulating a discus thrower. They have a snake for a pet and a son-in-law who plays the xylophone and prints incendiary flyers for the fun of it. Throw in a hulking servant and a Russian Countess for good measure and shake well.

As a child of the ’60s and ’70s, I couldn’t help but compare this family to the TV family The Munsters. The Depression-era analogues of Herman, Lily, Grandpa, Eddie and Wednesday were all present and accounted for, while radiant and glamorous Alice (Kate Maher) was, of course, the perfect prototype for the straight, chaste Marilyn Munster. The “normal” world’s shocked encounters with their strange lifestyle and habits were the basis of that TV show’s humor, and the same goes for this play. Just goes to show you what goes around…

The large 17-member cast was obviously originally intended to inhabit a full-sized Broadway stage, however Antaeus’ small theater adds to the general sense of chaos in Alice’s house. Fortunately, the comedy is still very fresh and there are plenty of laughs for the audience. If you have ever watched a Marx brothers movie like Animal Crackers or The Cocoanuts (both, incidentally, co-written by Kaufman and mounted as Broadway plays before they were films), you get an idea of the inane goings-on.

You Can’t Take It With You is a lot of fun from the get-go, and it is easy to see why this play won a Pulitzer Prize (and also, translated into film, won the 1938 Oscar for Best Picture). Nevertheless, a salute must be given to director Gigi Bermingham, a veteran actress who is directing her first mainstage production here. She has coaxed solid performances from all her actors, and the play hangs together very well, with good pacing and no sense of mustiness or tarnish. Additional recognition is due to scenic designer Tom Buderwitz, who has created a dense, visually rich set that uses what must be miles of white string to simulate pinstripes on the walls of the house.

You Can’t Take It With You urges us to be unconventional, live large, have fun. Even with the all too predictable reconciliations at the end, the play is a hoot, and you’ll leave the theater with a smile on your face. I know I took it with me.

Double-cast performances of You Can’t Take It With You take place Oct. 18 through Dec. 9 on Thursdays and Fridays at 8 p.m.; Saturdays at 2 and 8 p.m.; and Sundays at 2 p.m. Talk-backs follow the performance every Thursday. The Antaeus Company is located at 5112 Lankershim Blvd., North Hollywood 91601. Free parking is available in the uncovered Citibank lot on Lankershim, just south of Otsego Street. For reservations and information, call (818) 506-1983 or visit www.antaeus.org.