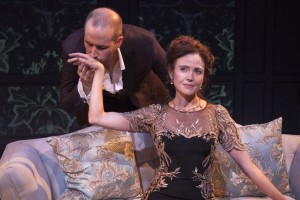 Antaeus, the theater group dedicated to performing classic plays, recently moved from their longtime home in North Hollywood to a sleek new space in downtown Glendale. With a roomy 80-seat theater and extra room for their expanding library of classic plays, the new theater is just what Antaeus needed to bring their high-quality productions to a wider audience. To kick off the 2017/18 season, they are presenting Les Liaisons Dangereuses, a scandalous, sexy romp through the aristocratic drawing rooms of pre-Revolution France.

This production, directed by Robin Larsen, is based on Christopher Hampton’s theatrical adaptation that first opened in 1985 in Great Britain. Audiences immediately responded to the tale of sex, deceit and revenge, and the play moved to ever bigger houses in London, and then to Broadway. Subsequent years have seen several revivals, as well as multiple versions in film (most notably a 1988 film starring Glenn Close and John Malkovich), TV, literature, opera, even some ballets.

The original story comes from a 1782 epistolary novel by Chaderlos de Laclos. While first regarded as merely scandalous, Les Liaisons Dangereuses was later seen as an ideological broadside against corrupt decadence of the ancien régime. Central to the story are its two main characters, the Marquise de Merteuil and the Vicomte de Valmont, a pair of former lovers who use charm, deceit and sexual power to manipulate those around them, often for no other reason than to take on an amusing challenge or to assuage some slight. As André Malraux observed, these two characters are the first in European literature whose acts are determined not by character, but by ideology.

Like all Antaeus productions, this one is double-cast for each role, a decision that allows flexibility for working actors. The cast I saw is called “The  Libertines.” Reiko Aylesworth plays the Marquise, and Henri Lubatti plays the Vicomte. The action begins as Merteuil vows revenge on a lover who has discarded her. She enlists Valmont to seduce his new young fiancée, Cécile, promising him a night of pleasure in recompense. Valmont demurs, protesting that the naïve young girl is too easy a conquest. Instead, he vows to seduce Madame de Tourvel, a virtuous young wife respected for her chasteness and religiosity. Meanwhile, Merteuil decides she is going to seduce young Chevalier Danceny, who has fallen in love with Cécile.

What follows is a series of malicious games set up by Merteuil and Valmont meant to besmirch and humiliate those around them. Aylesworth is excellent as Merteuil — all grace, smiles and flattery, even while she is sharpening the shiv she is about to plunge into the hearts of those she has targeted. Lubatti is very entertaining to watch as well. He is macho in bearing, but ever so solicitous of the ladies in polite company. Yet when left alone with the objects of his treachery, his silver tongue manages to twist everything around to make it seem as if his prey is the one being cruel for refusing him. Also of note are Elizabeth Rian as the hapless Cécile and particularly Lindsay La Vanchy as Madame de Tourvel. La Vanchy makes us feel the turmoil, agitation and self-loathing her character experiences as her veneer of respectability cracks and finally shatters under Valmont’s relentless charm assault.

The technical aspects of the production are well selected too. The set is painted in tones of gray, and the furnishings are sleek and somewhat modernistic, lending an air of temporal flexibility to the proceedings. Likewise, the costumes are not meant to be replicas of the extremely detailed and structured 18th-century regalia, but are elegant and eye-catching in their own way. If anything, it is the men that keep us rooted in the long-ago, with their blousy pirate shirts and swords (which Valmont and Danceny use to great effect in a duel scene toward the end).

Like any morality play worth its salt, Merteuil and Valmont get what’s coming to them in the end… well, at least Valmont does, quite permanently. In the 1988 film, Merteuil is exposed as a deceitful manipulator and is snubbed in society; in the book, she contracts smallpox, leaving her face horribly scarred thus exterminating her beauty forever. Curiously, in this play, the fate of Merteuil seems unclear after Valmont’s demise. The play just ends without any kind of terrible denouement for her. But nevermind. Antaeus’ Les Liaisons Dangereuses is one of the theatrical standouts of the season and is heartily recommended.