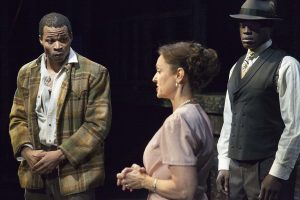 W.E.B. Du Bois, the first African American to earn a doctorate from Harvard, stated that “The problem of the 20th century is the problem of the color line.” And in few instances is that line more dramatically drawn than in Native Son, Richard Wright’s harrowing 1940 novel about the plight of a young black man in Depression-era Chicago. It’s a classic — and tragic — American story, one that many, if not most, schoolchildren are acquainted with. As such, Antaeus, the Glendale-based theater troupe that specializes in classic works of theater, decided it was more than appropriate to tackle this stirring meditation on race, justice, freedom and free will. The show continues through June 3 at the Kiki & David Gindler Performing Arts Center.

The first theatrical adaptation of Native Son was directed by Orson Welles and ran for three years on Broadway beginning in 1941. This version comes from a 2014 adaptation by Chicago playwright and actress Nambi E. Kelley. Its run at Chicago’s Court Theatre was the highest-grossing straight play in the theater’s 60-year history, and it went on to win numerous awards. Antaeus’ production is one of their strongest in recent memory: Director Andi Chapman has composed a haunting urban symphony of sound, light, fury and pathos.

The story tells the implosion of Bigger Thomas, a 20-year-old black youth (played by Jon Chaffin) who is struggling to find a way out of his mother’s ramshackle slum house, seeking any opportunity that will allow him some measure of independence and responsibility on the road to becoming a man. But with no responsible man around to give him any guidelines, he is alone in trying to figure out his path. Alone, that is, except for his shadow, or conscience, or inner superego — a character called the Black Rat (played by Noel Arthur).

Bigger snags a job as a chauffeur for a wealthy white family, and his troubles begin soon after. One night, Bigger is driving Mary, the reckless daughter of his employer, and her Communist-sympathizing boyfriend, Jan, while they paint the town. After Jan departs, Mary is too drunk to get to her room by herself and entices the bewildered Bigger to carry her inside. Mary’s blind mother hears the commotion and enters the dark room. Fearing for his job were he to be found alone with Mary, Bigger stifles Mary’s giggles with a pillow, accidentally suffocating her by the time the mother retreats. And from there, a web of lies intermingles with the chains of circumstance to entrap Bigger in the funnel to his inevitable fate.

There are numerous elements that work together to make this a particularly powerful piece of theater. First is the acting. Chaffin’s Bigger is the star of the show, and he puts on a tour de force, showing us the different sides of his character. Even though Bigger gets into his initial predicament by accident, we know he is not simply an innocent victim; he is also a robber, a rapist, and even a malicious murderer. But we also see the victim side of him — bewildered by a world that he does not understand and angered by the forces of racism, exclusion and disdain. Everything he thinks and does is in some way a reaction to his subordinate position to the dominant white culture.

Rapid-fire shifts in place and time, with various characters merging in and out of the spotlight, at times create a cacophony of voices that is almost impressionistic. The gentle grief of his mother, the imploring of his girlfriend, the desperate advice of his conspirators, the imprecations of the white justice seekers — all these combine and are filtered through the spoken inner voice of Bigger’s savvy alter-ego, the Black Rat.

One character that is not listed in the dramatis personae is the city of Chicago itself. We see, hear and feel the soul of the city via projections of rumbling El trains, shifting shadows of towers and industrial noise. Rarely has the sound design of a dramatic play been as creatively integrated into the production as here. Compliments to sound designer Jeff Gardner. Lighting designer Andrew Schmedake also deserves credit for his skill at recreating the urban jungle at night, as well as managing the complexity of shifting visual emphasis that arise from Bigger’s ordeal, as well as from his memory.

It’s not easy to take away any definitive moral lessons from this production. There seems to be an attempt to vindicate Bigger — the final image of the play shows him captured, shirtless, arms extended in the pose of a crucified Jesus; his head is lifted, defiant. But he’s done too much evil to be any kind of saint. At a time when the memories of the Jim Crow era are confined to the aged, it seems important to refresh the memory of that time when the racial divide was so harsh and definitive. Indeed, seeing those realities onstage in such dramatic fashion comes as somewhat of a shock. But it’s also an effective reminder of how far we’ve come since then. Not that “the color line” has disappeared — race relations is obviously still a serious societal issue — but the stark difference evident between then and now offers hope that progress will continue.