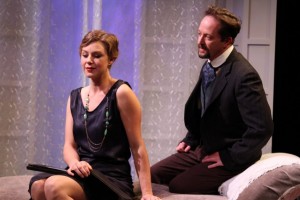 Henrik Ibsen’s Hedda Gabler (pronounced gobbler) provoked quite a stir when it premiered in 1891. While not unusual in its theme — personal fulfillment vs. societal expectations — it does feature a female lead whose brittle, manipulative and thorny demeanor can be cast in modern terms as a hot mess. That’s what makes it such a juicy role for any actress and so much fun for audiences, especially at the hands of the folks at Antaeus Theatre Company, upon whom one can always depend to field a pro crew of thespians. Hedda Gabler runs through July 17 in North Hollywood.

Some say (not Ibsen) that Hedda Gabler was the first truly feminist play. Up until then, women in plays were generally presented as noble and virtuous creatures, if sometimes conventional and silly on the debit side. But it is clear from the beginning that Hedda, just returned from her honeymoon, is not going to go quietly into her marital night. We suspect the attractive and witty Hedda must have had a swinging single life, because even though freshly installed in a luxurious home, she is already feeling suffocated by the strict conventions of a marriage to a man she never loved. Getting married just seemed like it was the thing to do for a woman like Hedda, bidding goodbye to carefree youth and staring down middle-age.

While modern audiences can easily understand her desire to be independent, free to come and go as she pleases, we must still work hard to sympathize with her somewhat cruel and heartless demeanor. The kinder critics of the time, failing to see any general idea or even satire in the play, used words like mean and sordid to describe Hedda; the harsher ones preferred terms like “monster” or “a complete perversion of womanhood.”

As always, the Antaeus company double-casts each role to offer flexibility to its company of actors. On this night, it was The Generals cast, starring Jaimi Paige as Hedda. She was a treat to watch, effectively communicating her character’s sophistication, leavened with dollops of annoyance and boredom. Her academic husband, Tessman, played by Adrian LaTourelle, was far from being just a nerdy stiff — he was passionate, devoted and completely clueless all at once.

Each of the other characters — the maid, the Aunt, Thea (Hedda’s school chum), the judge and the lover — are interesting in their own way: The women are at turns vulnerable or nervous; the men scheming or acerbic. Ibsen sets up an overlapping series of triangles among these players, making for some complex relationship math. Some are aware of what’s going on, others not.

Director Steven Robman is using an adaptation by Australian Andrew Upton and has set the play in the early 1920s, a time still distant, yet one where women were freer to enjoy themselves. The set and costumes are splendid, and it all seems a bit Gatsby-esque. We do not get any sense that these are Norwegians or any other kind of European, but rather it seems a properly American tragedy. And that is a tribute to the universality of Ibsen’s vision.

This is the last play that Antaeus will be performing in their space on Lankershim Boulevard in North Hollywood, their home since 2010. A new, significantly larger space in Glendale is under construction and will provide the company not only with two performance spaces, but an expanded library and classrooms for Antaeus Academy, arts education programs and the Antaeus Playwrights Lab. For amateurs of high-quality classic theater, this is indeed good news and a boon for the arts scene in Los Angeles.