Review: ‘Antony and Cleopatra’ at A Noise Within 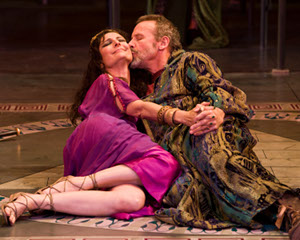 A Noise Within has an amazing new theater in Pasadena. Granted, these actors were mesmerizing on the group’s previous stage in Glendale, so a new, state-of-the-art venue can only enhance their work and add to the audience’s enjoyment in what are perhaps less significant ways. That said, when a company designs a theater that seats 300 but no audience member is farther than eight rows from the stage in a very cool Edward Durell Stone-designed mid-century modern building, that is a great theater. And “Antony and Cleopatra,” with shows continuing March 22 through May 13, is the kind of grand saga fit for this new home and the company’s 20th-anniversary season.

With “Antony and Cleopatra,” Producing Artistic Directors Julia Rodriguez-Elliott and Geoff Elliott wanted to take full advantage of the larger space — and the actors literally swing from the rafters. But some uneven details prevent this production from completely soaring. Still, I highly recommend this play, one you won’t see mounted nearly as often as a long list of other Shakespeare works, presented for the first time by Southern California’s only year-round classical repertory company.

Frank Kermode calls “Antony and Cleopatra” “one of the most highly wrought of all the tragedies” and Cleopatra “the greatest of Shakespeare’s female characterizations.” As Kath Bradley’s synopsis in the program points out, “Antony and Cleopatra” deals with various dichotomies: love and war, desire and duty, male and female. Its elements of political drama and soap opera, and journeys in history, psychology/sociology and philosophy, are mixed up often enough to please — dare I say it? — all theatergoers.

The play picks up where “Julius Caesar” left off (covering events between 40 and 30 B.C.). Mark Antony, Octavius Caesar and Lepidus rule the Roman Empire. To borrow from Bradley to summarize the action: Caesar takes arms against a Roman senator, Pompey, and his naval forces after the triumvirate had negotiated a peace. Then Caesar plots against Lepidus and eventually declares war on Egypt and Antony, who is essentially enthroned there with his lover, the queen, Cleopatra.

The actors kept all that fighting entertaining. In a very dramatic use of the new theater space, soldiers dropped from the ceiling and flew through the aisles on ropes, creating an exciting battle scene choreographed by Ken Merckx.

Susan Angelo was regal as Cleopatra, powerfully ruling her emotions that peak in unrestrained desire for Antony and jealous fury about Octavia (Caesar’s sister, whom Antony marries to strengthen his ties with Rome). She portrayed the intelligent leader known for her seductive charms (she also had an affair and a son with Julius Caesar) with confidence and vulnerability.

Elliott as Antony effectively transitioned from passionate in his scenes with Cleopatra to brutal in his scenes with his enemies. He sympathetically played a fallen leader who, as Kermode pointed out, chooses sensual pleasure over heroic virtue. We can feel for him, even if Antony’s lieutenant-general does blame women for men’s weaknesses: “So our leader’s led,  And we are women’s men.”

Antony’s assistant Enobarbus was played masterfully by Robertson Dean, who captured many nuances in the role. The rest of the 24-person cast was mostly consistently good. However, the role of Caesar needed more of the cunning one might expect of the victorious ruler of the Roman Empire.

The fact that the eunuch Mardian was over the top seemed to be part of a pattern of trying to play up too much comedy in this history/tragedy. There were many moments that naturally elicited laughs, but some distracting times when things felt forced or ventured into farce, as when Antony and Cleopatra laughed uproariously at his first wife Fulvia’s death.

Tom Buderwitz’s scenic design included colorful fabrics in Cleopatra’s palace and a reflecting pool at the front of the stage to draw the eye. Otherwise, it was a little too minimalist to convey the rich cultures of Rome and Egypt. Instead of backdrops, the audience looked at exposed scaffolding under platforms creating a second story for action and surrounding two crumbling (and effectively symbolic) columns.

Angela Balogh Calin had a lot of characters to outfit and mostly did an impressive job. Cleopatra’s attendants were lavishly costumed in flowing fabrics in a gorgeous range of hues with splashes of jewelry; and the Roman soldiers’ costumes complete with armor and Trojan helmets were also well crafted.

But Cleopatra’s costumes were disappointing and looked cheaply made, unbecoming for the woman Enobarbus describes as “appareled and attired like the goddess Venus commonly drawn in picture.” (Also, Cleopatra’s drastic hairstyle change seemed random.) Other than that, some other details stood out: Pompey and his men looked like scruffy pirates, Antony appeared in a terry cloth toga and sash, and among a multitude of great-looking sandals on Romans and Egyptians alike were a few pairs (including one worn by Cleopatra) that looked like they were straight off the department store shelves.

But those are minor details in an otherwise entertaining production. The creative forces at A Noise Within are talented at transporting us to another time and place and have added another great Shakespearean production to their repertoire.

“Antony and Cleopatra” continues March 22 through May 13 at A Noise Within. For information and tickets, visit www.ANoiseWithin.org.