Review: ‘Arsenic and Old Lace’ at the Odyssey 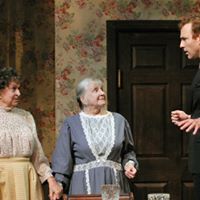 Who doesn’t love a good horror-comedy? You can drive by the Nuart Theater in West LA any Saturday night and see kids lining up for the midnight show of The Rocky Horror Picture Show. Even more classic than that is Arsenic and Old Lace, playing just a stone’s throw down Sepulveda at the Odyssey Theater. There’s a lot to recommend for both old-timers and novices alike: it’s smart and cerebral, wacky and silly, melodramatic and preposterous. It’s also creaky, outdated and maybe a bit too topical for its own good… for some, that is.

There was no question that playwright Joseph Kesselring had a hit on his hands as soon as the curtain came down after opening night on Broadway in January 1941. Critics loved it and Arsenic went on to run for 1,444 performances before decamping to London for a similar number of performances. It became a worldwide hit, leaving audiences in stitches from Stockholm to Sao Paulo. The 1944 film starring Cary Grant cemented the play’s lasting reputation.

Kesselring based his play on the case of Amy Archer Gilligan, who operated what was called “a murder factory” for the elderly and chronically invalid in Connecticut in the early years of the 20th century. Gilligan was arrested in 1916, charged with poisoning her husband and numerous of her charges with arsenic, apparently as a way to hasten the payment of life insurance policies that had been signed over to her. Kesselring’s genius was to turn Gilligan into two sweet, doddering aunts in Brooklyn, who good-naturedly helped lonely old men to shuffle off the mortal coil after imbibing glasses of their “special” elderberry wine.

The two aunts (played by Sheelagh Cullen and Jacque Lynn Colton) form the heart of the play, but the comedy is leavened with several other characters who amp up the zaniness factor. Teddy (Alex Elliot Funk) is the amiably insane nephew who thinks he is Theodore Roosevelt and yells “Charge!” every time he bolts up the stairs (in his mind, San Juan Hill). He also believes he is digging the Panama Canal in the basement (actually a hole for graves of his aunts’ victims). There is also Dr. Einstein (Ron Bottitta), a gangland plastic surgeon, and O’Hara the cop/wannabe playwright (Michael Antosy) and not least, homicidal nephew Jonathan (Gera Herrman) who has a body of his own to dispose of.

Against this play some “straight” characters — Mortimer Brewster, the drama critic (JB Waterman), and Elaine, his fiancée (Liesel Kopp). In all, there are 12 characters, and different combinations of them are constantly running in and out of the house, creating a chaotic situation that requires some degree of attention to keep straight.

While the typical 50+ audience seemed to be enjoying some belly laughs at the goings on, I noticed that my 21-year-old daughter’s reaction was rather more passive. And this highlighted a problem — the people who “get” the myriad topical references in this play are old and dwindling in number. The references to Boris Karloff went over her head (Karloff amusingly played Jonathan in the original Broadway production), as did lines like “My family story reads as if Strindberg wrote Hellzapoppin’.” Even “Teddy Roosevelt’s” comedic turns were largely lost on her. Of course, he had been dead only 20 years when the play was written…. he’s now been dead 98 years, and few are familiar with his personality and accomplishments.

But as Shakespeare teaches us, obscurity can be overlooked if the delivery is masterful. Actors such as Cary Grant, Peter Lorre and Raymond Massey carried off the movie version admirably. Unfortunately, this production did not have quite the level of acting chops to overcome the dustiness of the play. Whatever it took to carry us away helplessly like those crowds at opening night in 1939, who were reportedly “roaring with laughter,” physical comedy or spot-on delivery of lines, it just did not quite reach the mark.

Nevertheless, with a lovely two-story period set design, complex lighting and wonderful costuming, this production gets almost all of it right. If you are one of those who is a natural fan of the screwball madcap comedies of the ’40s, this play is for you. Its lively antics and clever turns of phrase, beyond being silly, evoke an America rapidly fading from living memory.