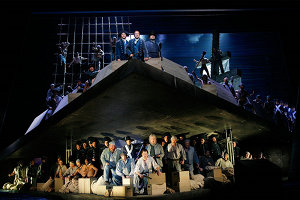 They ought to have a rating system for the accessibility of operas. One through four. One is for operas like Carmen where the tunes are memorable, the sets and costumes colorful, and the drama clear and unequivocal. A four rating would be for operas that are the opposite. That way, potential patrons would have a way of knowing whether a production is the kind of entertainment suited for young and/or inexperienced operagoers, or something best appreciated by aficionados and intellectuals.

This idea arose during intermission at LA Opera’s current production of Billy Budd. I was chatting with two young women who told me this was their first opera ever, and that their boss had given them the tickets, since he could not attend. When I asked them what they thought of the opera so far, they looked at each other and shuffled their feet, fidgeting. Finally, one of them asked, “Are operas always this slow?”

This is not to say that Billy Budd is dull or uninspiring per se. The set is well done, the singing is competent, and it certainly has its moments of drama. But still, this is a mid-20th-century Benjamin Britten opera, and like The Turn of the Screw performed here a few years ago, it is not for amateurs. There are no women in the cast, no hummable tunes and a downbeat mood reflected in the muted gray colors.

That said, the opera buff (or Britten fan) will find a good deal to appreciate here. Director Julia Pevzner has created a work that expresses much of the symbolism and sense of doom inherent in the Herman Melville novella upon which the opera is based. For example, during the scene where an enemy vessel is sighted, Claggart, the Master-at-Arms, prepares to tell the Captain of Billy’s supposed perfidy. But then a thick mist comes in, obscuring not only the enemy ship, but also (symbolically) the truth of what is happening onboard.

The set is quite impressive. It consists, simply enough, of a large downward-canted square of wooden planks angled sideways so the front corner juts over the edge of the stage above the orchestra, like the prow of a ship. Toward the back is the main mast with two spars, dark and looming, like a gallows or… well, Billy climbs up the mast at one point and standing on the lower spar, spreads both arms out against the upper spar, posing until we get the point.

Not until the second act do we see the ingenious mechanical operation of the stage. The “deck” is actually hinged in the middle so that the forward-most corner of the “deck” swings up via hydraulic jacks like a gigantic jaw and lets us see what is going on below decks. Here we are able to see the cannoneers preparing for battle, Billy’s confrontation with Claggart in the Captain’s quarters, as well as his trial, before the jaws close up again for the ultimate denouement on the top deck.

This is an interesting libretto that studiously preserves the arcane lingo of 19th-century sailing ships that Melville knew so well. Words like mounser and lickspittle and foretopman may be archaic today, but we are reminded that they were once common on the high seas. The costumes are also of the period (1797), with brass-buttoned greatcoats and Napoleon-style bicorne hats recreating the mode du jour. It all makes for a convincing immersion into a very foreign world.

Britten’s idiosyncratic music befits the high drama taking place on stage. The orchestra of 75-plus musicians is huge and includes several percussionists, one of whom delivers great thwacks to a bass drum for moments of high impact, as when they are preparing for battle. You can really feel it when they let loose. The singing was, I felt, less successful. The singers themselves demonstrated their vocal talents, but it sometimes felt like they were just making up any old notes as they went along, with no correspondence to the music. The strongest voices, appropriately, were tenor Liam Bonner as Billy, Richard Croft as Captain Vere and baritone Greer Grimsley as Claggart.

With the large orchestra, large chorus of sailors and bi-level set, the production is big and impressive and it is obvious that it was expensive to mount. The viewer does get the sense of spectacle that we expect from opera, but because of the challenging music, the colorless surroundings and the complex symbolic themes, I’d rate this opera a 3.5 on the accessibility scale. Leave the kids at home.