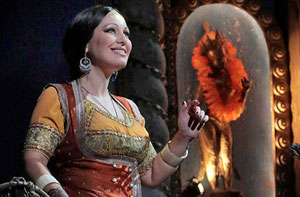 Hot on the heels of the perennial smash Carmen, LA Opera is mounting another earlier opera from Georges Bizet, The Pearl Fishers (Les Pêcheurs de Perles). Instead of Southern Spain, this time we are whisked halfway around the world to Sri Lanka at the confluence of industry, religion and lust. Good ingredients for an opera? Mais, bien sur! It’s not the last word in memorable music, but the sets, costumes and technical direction combine to provide a show that is evocative and rich in exotic detail.

Bizet was not even 25 years old when this opera opened in 1863, and it was hardly an auspicious debut. Critics dismissed it as derivative, and it was not revived again during Bizet’s lifetime. It got a second life beginning in 1886, and by the mid-20th century had become a fairly well-known staple of the operatic repertoire. An interesting side note is that co-librettists Eugène Cormon and Michel Carré admitted much later that, had they known Bizet’s quality as a composer, they would have tried harder to craft a better libretto. The characters don’t have much personality, and the crucial final scene depends on a farfetched coincidence involving a necklace.

While there is a large chorus of villagers that frequently is singing offstage, there are only four solo singers in the opera. Lifelong friends Zurga (Alfredo Daza) and Nadir (Javier Camarena) are rivals for the love of Leila (Nino Machaidze), a virgin Priestess and consort of High Priest Nourabad (Nicholas Brownlee). With a tenor, a baritone, a bass and a soprano, the vocal bases are well covered and all four singers are in fine form. Ukrainian beauty Machaidze makes for an appealing Leila who is only modest in her demeanor, certainly not her strong, clear voice. Daza and Camarena sing a beautiful duet together in Act One that is one of the highlights of the performance.

This Pearl Fishers is a co-production of the Metropolitan Opera and the English National Opera, and you can see this DNA in the quality of the sets by scenery designer Dick Bird. The opera opens with bubbles rising on a scrim and pearl divers “swimming” across the stage. Remarkable imagery.

The first act setting is a kind of seaside shantytown, a jumble of makeshift shacks, docks and ramps rising up from the roiling water, often suggested by billowing fabric. Act Two features a small temple and a dock where lovers Leila and Nadir ignite their passion. Act Three begins in an administrative office with stacks of paper in shelves to the ceiling. This is where Zurga questions the two lovers who have been spotted and apprehended. You notice a small TV in back with a glowing neon power indicator — the first sign that we are in modern times and not hundreds of years ago, a temporal setting that the previous scenes left ambiguous. Finally, in the last scene, we are back out in the village where the townspeople have gathered to watch the executions of the two lovers. Most of the scenes are at night and lit dimly except for the spotlit singers, adding to a sense of mystery and wonder.

The technical details are especially effective in two cases: The storm between Act Two and Three, with lightning flashing, thunder clapping above the wave-tossed village; and the final scene where the village begins to burn and real flame spreads across gas burners in the background. It is a rich and satisfying denouement to the stormy proceedings of the action between the characters. However, the final fate of Zurga is unsatisfying. Although he has burned part of the village as a way to let his condemned friends escape, nothing happens to him. He just walks offstage while the village burns and will presumably face some unknown consequence. Apparently, earlier versions felt the same need for a more definitive end to Zurga with him being cast onto the pyre as punishment for the mercy he offered to his friends.

Maestro Placido Domingo is conducting the orchestra for most performances (except for Oct. 25 and 28), and he does a wonderful job of bringing out the colors of the various instruments Bizet has chosen, particularly the horns and harp. The Pearl Fishers may not be a mature opera in the sense of top-drawer music and libretto, but it is a very enjoyable one with great singers, beautiful sets and a mystical feeling nurtured by technical proficiency. Very much recommended.